NFL Fans are the Worst, Sometimes 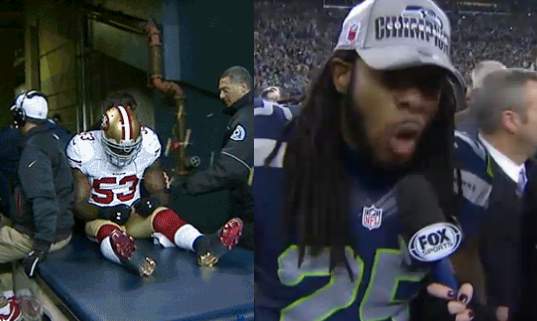 Well, who saw this coming? The Seattle Seahawks are headed to New York to face off with the Denver Peyton Mannings for the NFL’s top prize. Seattle, led by arguably the most dominant defense in the league, managed to out-last Kaepernick and the Niners in an all-out, brutally physical, and at times just plain violent, grudge match for the privilege. Many people speculated that the two regular season games between Seattle and SF would be a playoff preview, but no one could have predicted the level of tension and animosity that the resulting playoff game would deliver, from the fans and players alike.

Every game between bitter rivals is going to be intense, in every sport. Whatever the match up, whether it’s the 49ers vs. the Seahawks, Tom Brady vs. Peyton Manning, the Red Sox vs. the Yankees, the Celtics vs. the Lakers, the Celtics vs. the 76ers, the Celtics vs. the Heat (basically I’m saying Boston has a lot of enemies), it’s probably gonna get contentious. When it’s a playoff situation, multiply that by ten. That said, pride in these match-ups is not solely derived from victory. It mostly is, but there’s still some pride in maintaining sportsmanship – having dignity and respect for the game and the other team. Again, most of the pride is in winning. But not all.

When you just made the play that sent your team to the Super Bowl for only the second time in its almost 40-year history, despite 13 total playoff appearances, in the face of immense media hype and excessive analysis of your own play by talking heads, you might lose your cool and react like this:

It’s not the most sportsman-like thing he could have done. That’s not my argument. But his passion is undeniable, and he had heard a lot about how unstoppable the 49ers wide-receiver Michael Crabtree is (you know, from people like Jim Harbaugh). And for what it’s worth, he apologized for what he said the next day.

Tragically, because the internet will always be simultaneously the best and worst thing in the entire world, there was a massive and immediate outpouring of dumb ignorant people saying dumb ignorant things. I don’t want or care to embed the most egregious examples (some are still up), but if you want to take a baffling look at what the Confederacy would have looked like in the digital age, you can go over to the Public Shaming Tumblr and check out the screen caps.

Tommy Tomlinson at Forbes really quickly posted his take on the terrible things that the basically anonymous troglodytes of the internet had to say to Richard Sherman via social media outlets like Twitter. He makes a lot of excellent points, but my favorite is this:

If you stick a microphone in a football player’s face seconds after he made a huge play to send his team to the Super Bowl, you shouldn’t be surprised if he’s a little amped up.

It’s that simple. His job revolves around his outstanding physical ability, competitiveness, and intensity. It shows. Decent people with internet access around the world noticed the trend of racist people seeing something that they could be racist about and in turn being racist about it, and some made the blanket statement “49ers fans/Broncos fans are racist!” Well, yeah, you can say that, but it’s the same line of logic that because drinking and driving is a dangerous crime, you can say “Anybody who drinks alcohol is a dangerous criminal!”

Now then, we’ve established that the Seahawks franchise and its fans do have a reason to hold some righteous indignation, and the 49ers fans/Broncos fans/non-Seahawks fans are the only ones to blame. Well, the first part is true, but the second part is not.

In one of the most painful close-ups that Fox has ever decided to replay infinity-billion times, NaVorro Bowman’s gruesome knee injury in the second half was so bad that he had to be carted off the field. As he was being driven off the field, right as he got to the tunnel under the stands, some asshole fans threw popcorn at him, just to rub salted butter in the wound, as it were. Bowman, one of the corner-stones of a very highly ranked defense, was playing as well as ever this season. In the final home game at Candlestick Park, he made this play to secure a 49ers victory :

He’s a great player whose talent is respected by everyone else in the NFL. Does he deserve to be disrespected like that when he’s just been terribly injured at the NFC Championship game? No. Do the actions of a few assholes reflect how the Seahawks and everyone who supports the Seahawks act or feel? Not at all. But those people did it, and plenty of people were quick to call foul on the Seahawks “legendary” fan-base, the “12th man.”

Interestingly, one of the fiercest critics of the popcorn-throwing incident was Richard Sherman. After the game, he had heard about it but wasn’t sure if it was true. In an interview after the game, he said this:

If it’s true, it’s beyond terrible. That’s as low as it gets. I’m sure whoever did this is in a small minority of fans, because I don’t think that kind of action is an accurate representation of the character of the 12th man.

So what’s the point? The Seahawks won. The 49ers lost (which thankfully means all that obnoxious “Quest for Six” bullshit is shelved for at least another few months). Millionaires physically injured each other so that CBS could sell commercial time to Budweiser and Dodge (by the way, did you ever notice that EVERY month seems to be “Truck Month?” It must be like Groundhog Day at your local Ram dealership). During and after the game, people on both sides did terrible things, and in response, other people got upset. That’s fine. Get upset. But please be thoughtful about it. Please keep in mind exactly who you’re upset at, and why. And for the love of God, if you’re not black, please stop using the n-word on Twitter.