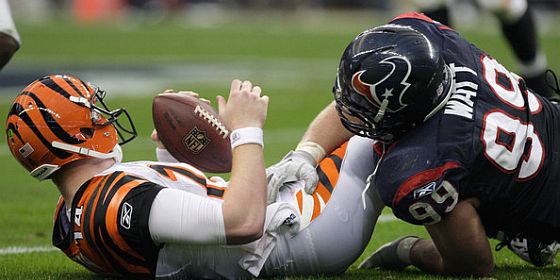 The 2012 NFL season is just past its midway point, with every team having played eight games as of Monday night. We’ve learned a lot about some teams, and know very little about others going forward. We’ve seen rookie QBs excelling and sophomore QBs slumping. We’ve seen injuries befall stars like Ray Lewis, Darrell Revis and Maurice Jones-Drew while Adrian Peterson is completing an incredible comeback.

With eight (or in a few cases seven) games left in the season there is still a lot of football to come, and as we looked at the league landscape we saw some stories developing. We make eight predictions for the rest of the season, some obvious, but a few that could be controversial.

The Atlanta Falcons have are the lone remaining undefeated team after eight games. More importantly for their postseason hopes is that they are a whopping four games ahead of second place Tampa Bay. With two winnable games (at New Orleans and vs. Arizona) between Atlanta and a week 12 showdown with the Buccaneers, the Falcons should be in position to win the NFC South with a win in that game.

While Atlanta isn't an all-time great team on paper, they have a well rounded offense and opportunistic defense that has put them in position to win every week. With only one real challenge (New York Giants) left on the schedule the Falcons have a legitimate chance to go 16-0. 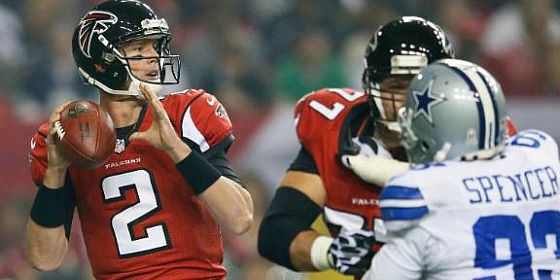 The Ravens reach the midway point of the season at 6-2, and with a one game lead over Pittsburgh in the AFC North. The do so without much in the way of contributions from starting QB Joe Flacco. Flacco has been abysmal on the road (where the team is 2-2) with a completion rate of 52% and more interceptions (4) than touchdown passes (3). This comes in a crucial season for Flacco's future with the team that drafted him in the first round of the 2008 draft, as he faces free agency for the first time. With Flacco likely to require a long term contract or a franchise tag the Ravens will have to consider a future without him under center. If that is the case the team will need to know what they have in backup QB Tyrod Taylor. With only four regular season attempts in his two year career Taylor hasn't had an opportunity to show much so far, but the Ravens will look to give him some additional opportunities before the season closes out. 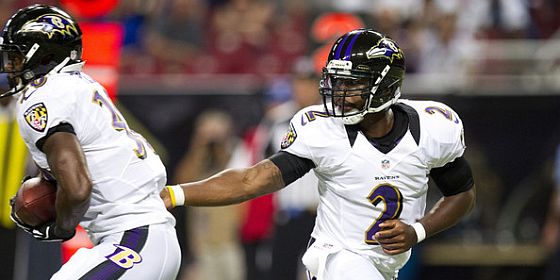 After eight games new Colts QB Andrew Luck and former Colts QB Peyton Manning had posted identical yardage numbers. This has led to some easy comparisons for lazy writers, but Manning has been the better player when you look at the complete stat line.

While Manning has been the better player (and will remain so), the Colts count on Luck more than the Broncos rely on Peyton. The Broncos made the playoffs last season on the strength of a solid defense and reliable running game. The Colts have neither of those things right now, as Donald Brown and Vick Ballard don't offer the ground support that Denver receives from Willis McGahee. If the Colts expect to make the playoffs (and right now they are in the 1st Wild Card spot) then they will do so on Luck's arm. While the Colts look to continue their surprising run the Broncos will be trying to protect and preserve Manning for a likely playoff runs themselves. Expect Denver to rely primarily on McGahee late in the season, which will allow Luck to outperform Manning going forward. 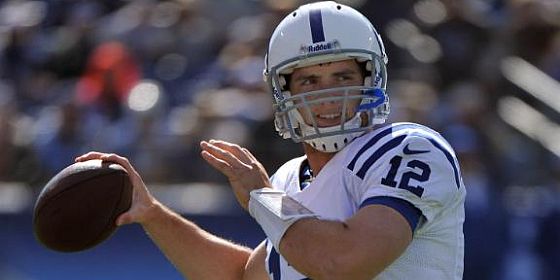 The Texans won’t earn a bye in the AFC.

Through eight games Houston looks to be the overwhelming favorite to finish in first in the AFC. They have two game leads over Pittsburgh and New England and a one game lead and tiebreaker over Baltimore. They feature the conference's best defensive player in J.J. Watt, a dominating running game led by Arian Foster and a solid QB in Matt Schaub. The problem for Houston is their remaining schedule with games at Chicago, Detroit and New England and a pair of games with the surprising Colts. Schaub hasn't proven that he can stay healthy over a full season, and at some point the Texans will need to reduce the work load of Foster if they hope to have him available in the playoffs. The Texans face two major challengers going forward; Pittsburgh, who are playing their best football of the season and New England, which just improved its biggest weakness by adding Aqib Talib to the secondary. We expect both of those teams to pass Houston in the standings. 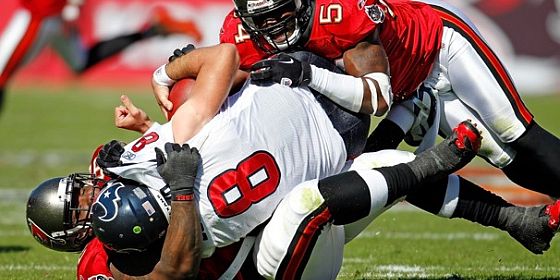 This might be the biggest reach on the list, but the Ravens will not make the playoffs in 2012. We've already talked about Joe Flacco's road performance, and with defense that can't stop the run (28th in the league) or the pass (22nd in the league) the rest of 2012 looks bleak for Baltimore. With Ray Lewis and Lardarius Webb out for the season and recent top picks Terrance Cody, Jimmy Smith and Sergio Kindle adding little the defense doesn't look to get any better moving forward. The Ravens also feature one of the NFL's most difficult schedules going forward, with only this weekend's game with Oakland looking like an easy win. 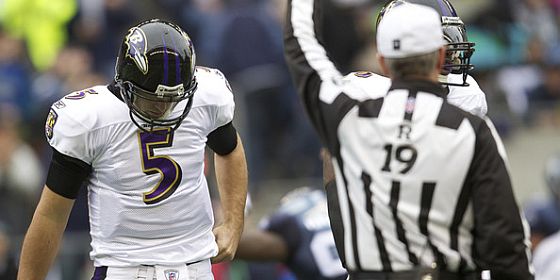 Andy Reid and Marvin Lewis will be replaced.

We wanted to say those both Reid and Lewis would be fired, but as two of the NFL's longest tenured coaches they will likely be given the option to resign. Both the Eagles and Bengals will miss the playoffs, and ownership is likely to want to make changes from the top down in both cities. For Reid, who has proven to be a substandard on-field manager, it is clear that his team has given up on him. Poor play calling and time management have cost the Eagles a handful of games over the last few years, which would have been enough to cost most coaches their jobs before now. For Lewis, it comes down to consistency. Following a surprise playoff run in 2011 the Bengals currently sit below .500, and appear to be fighting Cleveland for 3rd place in the AFC North. This has been a trend in Cincinnati over Lewis' tenure, as playoff runs are usually followed by losing seasons. With a young franchise QB and WR in place and extra picks in 2013 the Bengals will be the best job on the market, giving team ownership their pick of young coordinators to choose from. 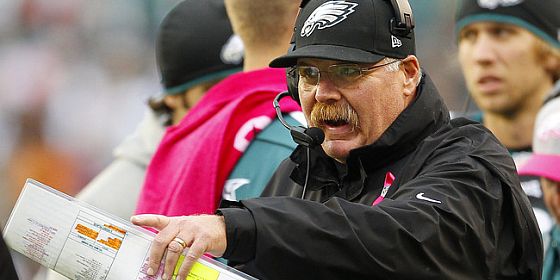 Roger Goodell hope that by handing off the last round of hearings on the Saints bounty scandal to his predecessor Paul Tagliabue that the issue would been off his desk permanently. That was stupidly optimistic, as the NFLPA has raised objections to the former commissioner acting as arbiter in the controversial case. While Tagliabue will likely try to bring the issue to a close by offering reduced suspensions, the sides are too entrenched for Jonathan Vilma and the rest of the players to accept any punishment. This case will likely wind up back in the courts regardless of Tagliabue's findings, which will draw it out long past the end of the season. 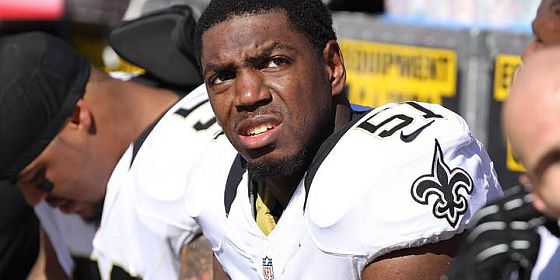 A Defensive Player Will Win MVP

While there are a number of QBs who will receive MVP votes, including former MVPs Tom Brady, Aaron Rodgers and Peyton Manning, it will be a defensive player who walks away with the award. Matt Ryan is the clubhouse favorite right now, but J.J. Watt and Chicago's Charles Tillman both deserve consideration at the midway point of the season. If they can keep it up over the second half both will receive votes for MVP. With no clear winner at the top the QBs could split the vote, giving the minority of voters who support a defender an edge in the final tally. Our pick is Tillman, who has forced an impressive seven fumbles, and had recorded two interceptions in eight games while leading the league's best defense. 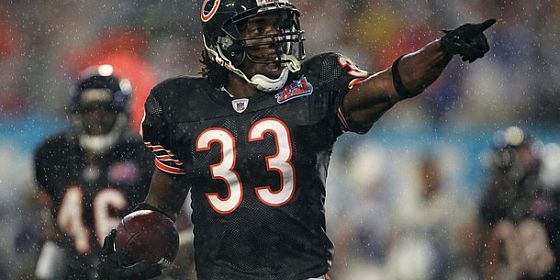