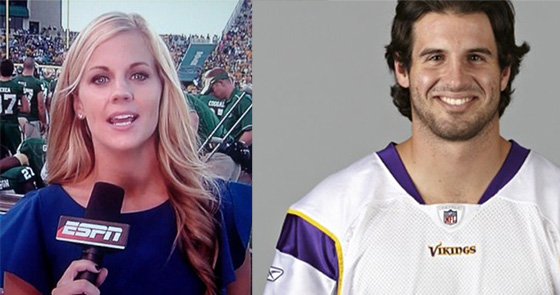 Vikings quarterback Christian Ponder is having a pretty good year. Following a difficult rookie season, where he threw as many interceptions as touchdowns, Ponder has stepped up in his sophomore campaign, increasing his completion rate, TD/INT ratio and QB rating while leading the Vikings to a surprising 4-2 start. If things on the field weren’t going well enough, Ponder also confirmed that he’s doing pretty good off the field as well. Asked by a fan on twitter if he was dating ESPN reported Samantha Steele, Ponder enthusiastically confirmed the rumor.

Ponder seems to be pretty impressed with himself for landing Steele. Steele is a rising star with ESPN’s college football team, taking over Erin Andrews’ spot on Gameday and the Thursday night college football team. While rumors often abound about sideline reporters dating player, this appears to be one of the rare ones with some truth behind it. As a college football broadcaster Steele also can’t be accused of having a conflict by dating an NFL player. While we have always felt that sideline reporters are relatively useless, we have to congratulate the new couple.