NFL Quiz : Rookie of the Year 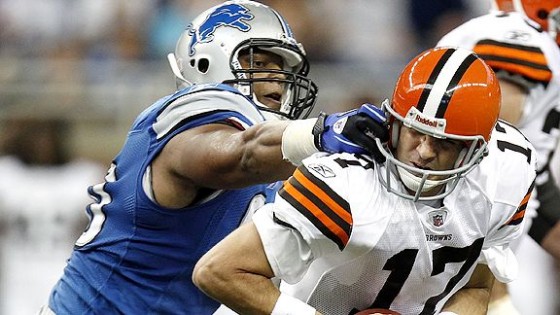 The Year of Suh

With the regular season coming to an end and the stories turning towards 2011, the time has come to take a look at the rookies of the 2010 NFL season and determine who is worthy of praise. Awards will be coming from the league and others as one of the best rookie crops in league history puts their debut in the rear-view mirror… and we want to see if you were paying attention.

Ten questions. Answer as you see fit. There may or may not be a correct answer, but we don’t give a damn regardless… we’re all about the love of the journey (and to be honest, I have no clue how to setup an actual quiz… so its more like a poll, and if you want to judge your answers by the masses or by my own, that’s your call).

The wise answer would be Ivory… undrafted, he comes in and finds opportunity due to injury and he takes full advantage, taking a few fantasy owners along with him. He’s averaging 5.3 yards per carry with 683 rushing yards on 130 carries, posting five touchdowns along the way. Clearly he was one of the most underrated NFL commodities available for hire this season.

However, I’m giving it to Perrish Cox… not only did he find the opportunity to play in a variety of roles for the Denver Broncos, but he contributed to the overall destruction of football love in the Mile High with an arrest for sexual assault, allegedly having his way with a girl who was passed out. He serves as a reminder to us all that most of the guys are complete and total assholes and that all of the awards, signing bonuses, and accolades change nothing. Cox has worked hard to balance the religious rise that will come with the arrival of Tim Tebow. You can’t have good without evil, and it sounds like Cox is one of the more evil mother fuckers in a group of social deviants working in Denver.

There’s something to be said for that. Doubt Cox wants to be recognized as the king of the assholes… too bad. 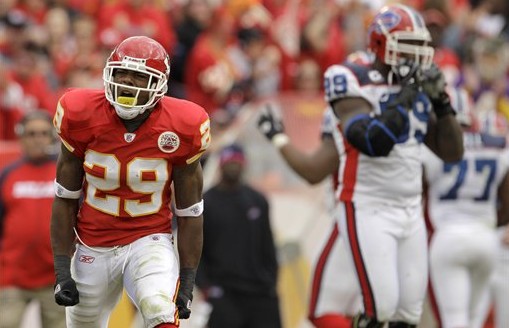 You can’t go wrong with any of these guys. McCourty has been the best corner on the roster for New England and clearly has made an impact at a position the Patriots needed this season. Ward was one of two defensive gems in Cleveland, though corner Joe Haden (as the seventh-overall pick) has received most of the attention. Thomas has provided all he can for a struggling franchise in Seattle and has also been a contributor on special teams. Berry has needed no time at all to become one of the most feared safeties in the league.

The safe answer is Berry, but we’d give our vote to McCourty… not so much because his team is winning, but in large part due to the lack of overall depth in the league at the position and the nature of the position. Safeties are cool, but corners are money. Berry will be a source of highlight for years to come. McCourty is the guy quarterbacks will quit throwing at.

Again, no wrong answer… ALL of those guys have been influential for their squads. Saffold took over starting duties at left tackle, beating out the Rams’ top pick from last season (Jason Smith) for the job. Walton started every single game for the Broncos and has been, by all accounts, the most reliable blocker on the team. Veldheer moved into starting honors for Oakland rather quickly and has been one of several young contributors helping that team improve on offense.

Know who you don’t see in there? Russell Okung, the second offensive lineman taken in the draft (he spent the bulk of the season injured). Trent Williams, the first lineman selected, played for a Washington offense that sucked balls through most of the season. We can’t reward anyone that helped get Rex Grossman a starting job. Bryan Bulaga has taken over in Green Bay but hasn’t been as quick to translate in professional pass protection. The two linemen taken in San Francisco, Mike Iupati and Anthony Dixon, have both been inconsistent through their rookie seasons.

Meanwhile guys taken in the later rounds are putting in work… and we didn’t mention Jon Asamoah in Kansas City, Zane Beadles in Denver, or Charles Brown in New Orleans.

We’re given this one to Pouncey. He made out with his brother… shit couldn’t have gone downhill with the quickness after that. He’s saved face and been the lone vision of both production and health on the Pittsburgh offensive line. 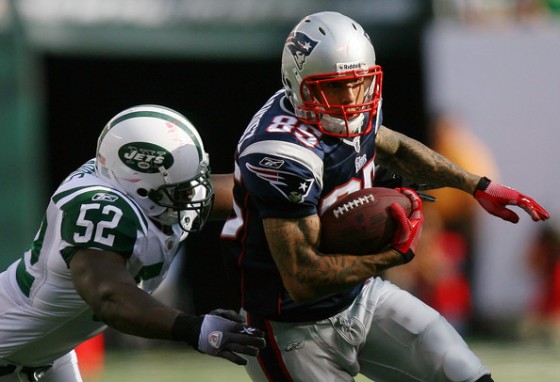 This could be the most overachieving group of rookie tight ends the NFL Draft has seen in some time. We left Rob Gronkowski (one of three Gronkowski brothers in the NFL now) from New England off the list as well… but few of these guys were anticipated as impact players and all have proven capable of making plays and helping their team win both as receivers and as blockers.

We’re giving it to Hernandez… though the old-school bone aches to give it Moeaki. That kid was taken late in the third round, he’s one of the most undersized players at the position, and he finds a way to get involved in almost every snap he makes. He’s been an outstanding all-around contributor for a team no one thought would win with such regularity.

This is the most asinine question on the sheet.

Its Williams. Its not even close. Some of you have a hard-on for Bryant… whatever. His season may have been either ruined or saved by injury, depending on how you view the reality of the situation. It doesn’t matter, because an objective or subjective view give this award to Williams.

There shouldn’t be a single vote in any other direction.

So many ways to take steer this conversation… but we’d start by noting this: it is becoming painfully obvious no other position (other than defensive end, the only possible debate) is given more hope and expectation, and no other position disappoints more often.

The world expected Ryan Mathews to be the savior in San Diego. They won’ t be in the playoffs and Mathews did nothing to change that. C.J. Spiller was labeled as the most explosive addition at the position, and he hardly got on the field in Buffalo (and they could have used him). Ben Tate’s anticipated rise was over before it began after he blew out his knee. Toby Gerhart spent most of the season watching Adrian Peterson shine. Even the other guys on our list weren’t terribly impactful for their teams… Best showed a ton of potential (and not so much durability) and McCluster is one of the most versatile weapons in the game today (good at a few things, not great at any one of ’em in particular).

Our vote goes to the undrafted option… Blount was known more for his right cross than his game coming into the season, and thus he fell out of the Draft without an employer. The Bucs picked him up, let him fight with teammates during training camp to get him comfortable, and now he’s easily the star of this year’s rookie rusher crop. 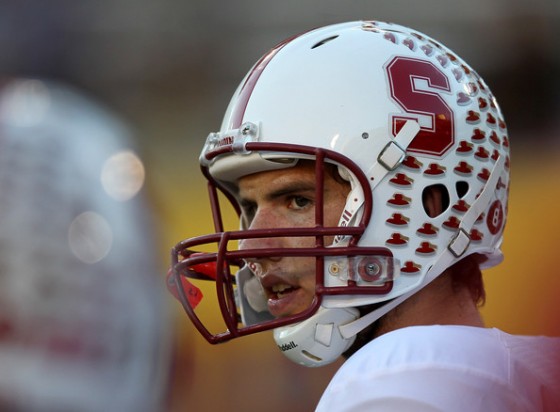 This is the reality of the situation in Carolina. They used their second-round draft pick to take the ego out of South Bend, they gave him playing time, and now they are the proud owners of the top pick in the 2011 NFL Draft.

The Catholics would be the ones voting for Clausen.

The rest of the world… the objective, reality-based members of our congregation… will be voting (B) or (C).

(I’m voting “C” only because I don’t believe the Panthers are going to put the decision in the right hands, I don’t believe they are capable of NOT screwing this all up, and I want the joy of laughing at them when Luck holds up a Buffalo Bills jersey.) 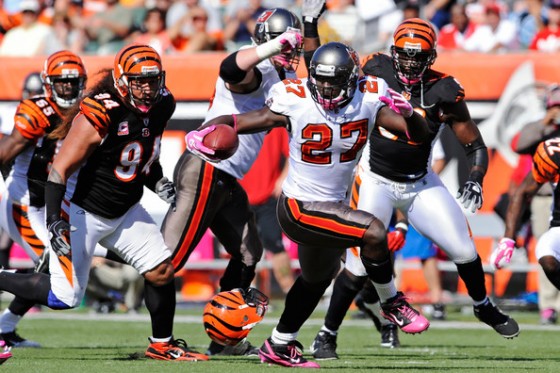 The temptation is to lean Bradford, having made every start for the Rams with numbers that should impress considering the demands of the position.

The correct answer is Blount. Any fantasy owner who put faith in this guy did so no expectation that he would finish as one of the top 20 at his position. Not only has Blount been a gift for fantasy owners this season, but he’s also been a source of pride in this year’s fantasy playoffs… averaging 111 rushing yards per game over the last four weeks with a couple of touchdowns to boot.

These days you don’t get enough options at running back. Blount’s ability to be one puts him on top of this year’s rookie crop… at least from a Dungeons and Dragons perspective.

I would hope each and every vote cast is for the same guy… ’cause this isn’t even close.

It hasn’t been a great season for the rookie defenders. I’m not sure if Pierre-Paul is the right guy for this list but he’s one of few making an impact for his team. Ward and Berry have been stars at safety and both deserve recognition… Ward is a fiend for tackles while Berry is one of the most versatile backfield defenders we’ve welcomed into the league over recent years.

No one cares… 2010 will one day be known as the Year of Suh. He’s been better than advertised, he is already established as one of the most feared quarterback hunters in the game, and he has built a rookie resume that suggests greatness is the only viable expectation moving forward.

Suh is not only a member of an impressive 2010 rookie class… he may be the leader.

Blount has been a gem for the Bucs, but like the defensive query above, there is no doubt in answering this.

Bradford is earning review as the best rookie passer the league has seen since Peyton Manning with numbers that support such lofty assertions, and as such he is the clear choice as the 2010 Offensive Rookie of the Year.

When it comes to fantasy, a top-20 rusher is much more influential than a top-20 passer… but for a franchise on the mend looking to rejoin the fight for success in the playoffs, a player of Bradford’s caliber, playing the most critical position on the field, is priceless.

There are no wrong answers.