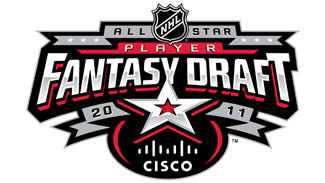 For the first time ever, the NHL had two captains pick their respective teams for the 2010-11 installment of the league’s All-Star Game. Each moment during the Fantasy Draft was a first, but below are just a few of our favorite moments from this special night – and a few cringe worthy moments. This being the first time anything like this was attempted, we give the league credit. However, you’ll still find we had numerous awkward moments (in red) to go alongside the positives (green).

Captain Eric Staal earned the first pick in the Fantasy Draft, and his much discussed pick went to goaltender Cam Ward. Instead of opting with statistics, Staal got the goaltending position taken care of in a hurry. This doesn’t really come as much of a surprise as the two are both representatives of the hometown Carolina Hurricanes.

It would have been nice to see Staal go the less sentimental route with his selection, but we can’t blame him for playing up to the local fans.

The other captain, Niklas Lidstrom, went the statistical route and opted for Steven Stamkos. Stamkos has been unstoppable, leading the league in scoring with 67 points heading into the All-Star break. 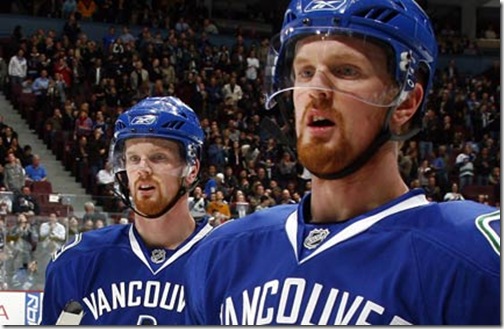 Henrik and Daniel are twin brothers that play with robotic precision. Somehow, these two have always played on the same team and grace the Vancouver Canucks with some incredible talent. In back-to-back picks, Daniel Sedin hopped off the board and Henrik followed just behind him, placing the two on opposite sides for the very first time.

One of the main topics heading into the draft, we aren’t surprised that the two captains chose to split these two up. It should be fun to watch the two finally face off against each other rather than helping each other with that freakish twin intuition.

It really isn’t much of a surprise that guys that play alongside each other all season would select their friend when it was their turn.

Eric Staal’s first pick was Cam Ward. Really? We know this was a move to get the crowd behind the two of them in the game on Sunday, but the neutral fan would have loved to see a home crowd divided between rooting for their goaltender and rooting for their forward.

The next several picks were just teammates selecting teammates, leaving little controversy, little speculation and little “fantasy” to this draft.

Versus Taking Things Seriously / Too Much Analysis

From family “rivalries” to claiming friends are bitter, Versus sure ran with the fact this game carries a huge amount of importance. While we’re sure there is some joking about where someone is picked, Versus acted as if friendships live or die based on this draft.

In addition, some of the commentary following the picks just seemed a bit over the top in the cheese factor. After each pick of a notable star, the commentating crew would cry out “finally”, as if some injustice was being done.

The telecast claimed plenty of players were lobbying for a high pick, texting and calling to get themselves selected. Do we really believe that? Not really, and Patrick Sharp of the Chicago Blackhawks pretty much confirmed it by saying he didn’t know of much outside of his own.

Players Going Along with Versus’ Seriousness

The All-Star Game has always been a lighthearted occasion for the NHL, and even with the new rules, the players still showed this is a fun matter and not one to be made too big of a deal out of.

From saying they were angry to saying they weren’t going to buy their brother a Christmas or Birthday present, the players played along with the staged drama Versus was dishing out. The end result was quite a few funny lines and the players being exposed as who they truly are – some very down to Earth individuals.

Yogi, is that you?

When asked if he would lay some hits if he was picked last, David Backes responded by saying, “A little physicality never hurt anyone.” Berra would be proud.

Of course, we know there won’t be heavy hitting and especially no fighting in an All-Star game, so the mere fact he was asked if he’d be laying out hits is a bit ridiculous. Still, Backes responded like a champ with one of the best quotes of the night.

The NHL has seen plenty of issues with attendance in recent years, so it comes with some irony that a few clubs will have NO player representing them in this year’s All-Star Game.

The Chicago Blackhawks carried a slew of representatives while the Buffalo Sabres, Calgary Flames, Florida Panthers and New York Islanders will not have a single representative.

We understand the league is trying to showcase the league’s best talent, but to not have all 30 teams represented in the league’s showcase just comes off as odd.

Picked Last? Here, have a Car.

If only it was that easy back in gradeschool. When you were picked last you had to deal with humiliation and some serious confidence issues.

In Phil Kessel’s case, his selection by Team Lidstrom as the draft’s final pick earned him a charitable donation to the charity of his choice along with a brand new 2011 Honda Sierra Sport Hybird.

We like the charitable donation, but it likely should have just stopped there and not gone to the lengths of giving an All-Star a car. These guys make plenty of money. If anything, give a free ride to one of the rookies just emerging on the scene.

You’ll notice the “Overall” title is neither in green nor red. That’s because this was the first time the NHL has attempted such an event. It had its successes and it had its misses, but overall it was something completely new across all of sports.

The game itself should prove to be much more interesting as we see unlikely pairings of guys that play in not only different divisions, but different conferences.

Hopefully the NHL can build upon what they learned from this first experiment and turn it into event that really gets people excited.