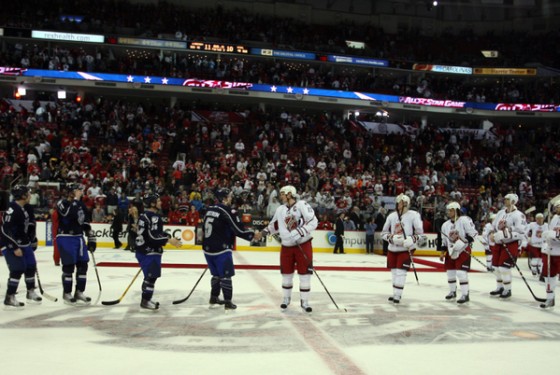 There was plenty of debate whether the NHL’s attempt at bringing a new format to the All-Star Game would be a success. Judging by the ratings being revealed by the cable network Versus, the NHL might be on to something.

According to Versus, the telecast of the newly created pick-’em All-Star Game produced an average of 1.5 million viewers, with the broadcast peaking at 2 million viewers. These numbers may not sound overly impressive, but they indicate a 36% increase when compared to the 2009 All-Star Game (2010 featured the Olympics, thus no game).

The game wasn’t the only success as the skills competition the day before saw an average of 1.3 million viewers. The skills event came across as slow paced at times but did feature plenty of excitement and curiosity during the shootout and breakaway portions of the contest.

The new format of two captains selecting their own teams likely drew plenty of new attention to the contest, but whether or not the league will see sustained success under this new format is debatable.

The game itself was pretty exciting, featuring an 11-10 final score in what could be labeled as nothing truly representative of the game of hockey. It was an offensive driven, flashy display that was easy to follow for a newcomer to the game.

Will the NHL use this captains selecting their own teams in the future? Or does the NHL have to continually revamp their format in order to maintain impressive ratings?

In case you missed the All-Star Game, below is a video full of highlights – weighing in at 17 minutes long, you’re sure to get your star-studded fix.