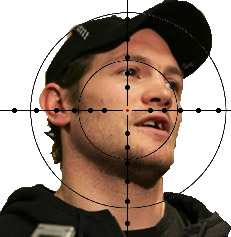 This came two days after Cooke’s knee-to-knee hit on Alex Ovechkin in Washington. When I brought up the incident to Capitals coach Bruce Boudreau in the press conference after the Caps’ 3-0 win, Boudreau exploded at the podium.

“It was Matt Cooke. Need we say more? It’s not like it’s his first rodeo. He’s done it to everybody and then he goes to the ref and says: ‘What did I do?’ He knows damn well what he did. There’s no doubt in my mind that he’s good at it and he knows how to do it. He knows how to pick this stuff. We as a league, we still buy into this that, ‘Oh it was an accidental thing.'”

(BTW, our friends at The Score have put together this Cooke collection… nicely done.)

Cooke was not fined or suspended for the hit on Ovechkin, so it came as no surprise that Cooke continued to play recklessly and got suspended for another incident soon after.

The Capitals the other night also attempted to make Cooke pay for his hit on Ovechkin as Gunaxin 6Q alumnus Matt Bradley challenged him to a fight, which Cooke declined.

Cooke does not deserve that respect, and Bradley should have nailed him in the face (but Bradley isn’t like that). Cooke’s dirty play over the past few seasons, including a concussion-causing hit on Boston’s Marc Savard, is something the league needs to be worried about but the players need to answer, too. Sure, Cooke is being scrutinized by the league and will continue to get the occasional suspension, but he’ll also get away with many other dangerous plays that go unpunished. That’s what he gets paid for and suspensions are only part of the gig.

But the suspensions and fines only go so far. No player is thinking, “Cooke won’t sneak up on me this shift because he’s scared the league will fine him.” Of course, being sneaky and making the other team worry is part of the game, but that should be done with good, clean checks (of course, players retaliate for those, too, but it’s not the same thing when someone gets injured due to an illegal play).

If players, who are obviously worried about their own health when playing against him, want Cooke to stop, they need to meet violence with violence.

Target: Cooke. And if Cooke doesn’t get the message, via a check or a punch to the nose, then target one of his chums: Sidney Crosby.

By the way, the same thing goes for Sean Avery.

Too Many Men on the Site: Would You Want This Bum on Your Team?

Pens’ Labyrinth: Cooke Gets What He Deserves