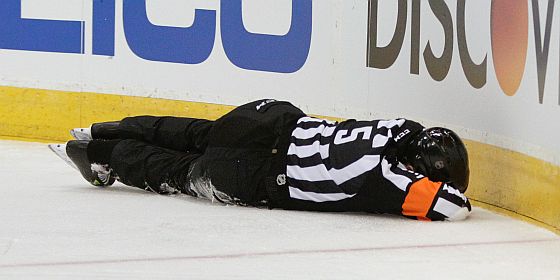 While officials in other sports might have to worry about getting knocked over by players accidentally, shoved by players intentionally, or the occasional errant beaning, hockey refs have it the worst. Not only are you working on ice in a game where every player is equipped with weapons, but the puck may come screaming at your head any moment.

Veteran referee Chris Rooney learned that lesson the hard way, as a shot off the stick of Jamie Oleksiak was deflected into his head minutes into a game between Colorado and Dallas. While a stretcher was brought out Rooney was able to leave the ice under his own power.