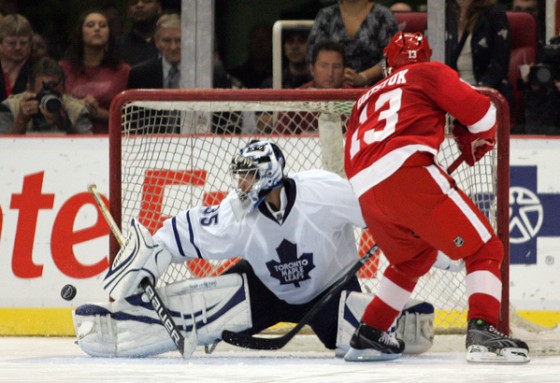 Pavel Datsyuk has had fewer chances to display his shootout magic.

The NHL’s method of using a shootout to determine a winner in a scoreless game is an issue that greatly divides hockey fans. Some love the excitement and entertainment of the spectacle that is the shootout while others think it is silly that precious points in the standings are determined by a skills competition.

Opponents of the shootout rejoice – they are happening less often this year.

According to this recent article in USA Today, more games that reach overtime this season are being decided in overtime before they have a chance to go to a shootout. Statistically, 47% of games reaching overtime have gone on to be decided in a shootout, dropping from 61% last year.

Based on current projections, the league may have the fewest number of games finish in a shootout since the contest was introduced back in the 2005-06 season. Of course, these numbers could certainly change.

Say what you will about the shootout, one thing is certain: they are damn entertaining. Below are just a few of the most creative shootout goals to be scored to date. Though the number of shootouts may be dwindling, we’ll still appreciate the ones that take place.