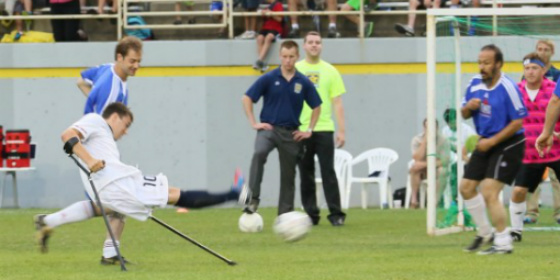 We’ve posted videos of amazing athletes before, but few that can match this goal by 17-year-old Nico Calabria. Taking a corner kick, Nico, a member of the Concord-Carlisle High School team elevated on his crutches to bury a shot in the opposite side of the net.

Nico is a congenital amputee, but being born without a left leg hasn’t stopped him from playing on his high school soccer team, or much of anything else, really. Nico is also a member of the U.S. National Amputee Soccer Team. And if that wasn’t enough, he also competes on the wrestling team for Concord-Carlisle.

If the name Nico Calabria sounds familiar, it probably should. He first gained national attention four years ago when at 13 he climbed Mt. Kilimanjaro to raise money for charity.

We don’t know about you, but we are looking forward to seeing what Nico does next.