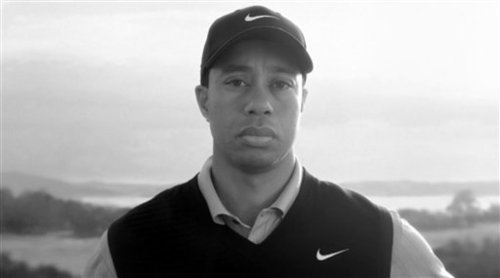 Anyone with access to television over the past few months has been inundated with news of Tiger Woods’ extramarital infidelity, so there’s no real point in rehashing that old news. But what is new -aside from Tiger’s return to the golfing spotlight- is an ad from one of the few sponsors who didn’t dump his dumb ass.

Yes, that’s right, the multi-billion dollar company, Nike, decided to stick by its war-torn and brow-beaten, 35-million dollar baby through the thick and thin. But, it’s not that simple. Some marketing genius (or perhaps Tiger himself) has come up with a commercial featuring the dis-embodied and, well, ethereal voice of Tiger’s father, Earl, more or less chastising his son for his indiscretions. Wow. Not sure where they cobbled the audio from, though it does sound like it’s all from the same conversation, and it’s scathing to say the least. No one likes pissing off their own dad, least of all their deceased one, so this verbal punishment seems creepily poignant.

Yet, even with the downtrodden Tiger taking his licks, it still reeks of delicious irony. In fact, Earl Woods was a known cheater and, likely, the last person who ought to be giving his son the third degree on marriage issues. I wonder if Nike knew that?