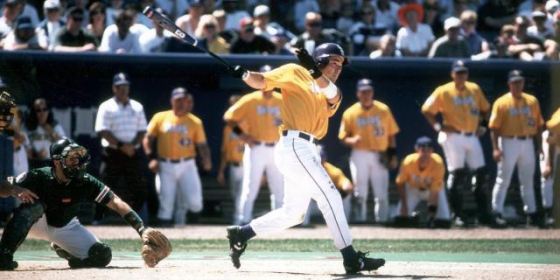 Fans of College Baseball probably all remember the time when Warren Morris hit a line-drive Home Run just over the wall by the foul pole, to lead the LSU Tigers to their third College World Series title in six seasons. It was one of the iconic moments in the sport of college baseball, and it happened during the 1996 College World Series, when baseball bats were giving players extraordinary powers.

By 1999, things began to change in the sport as the first wave of bats were fixed to trim down some of the power behind the plate while at the same time, the league was adding a new phase to the postseason, National Seeds. The first time the NCAA used National Seeds in baseball was during the 1999 College World Series. They named eight teams, ranked 1 through 8, that would automatically host a Regional and a Super Regional playoff tournament before heading to Omaha. It changed the sport and has given any team a chance at a title. 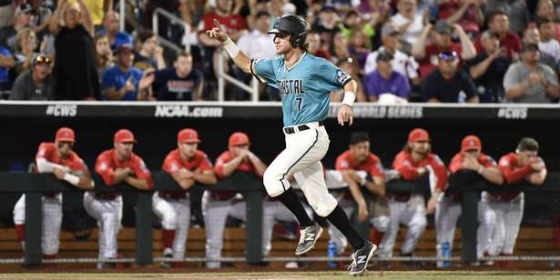 The best example of this has come this year, in the 2016 NCAA College World Series, where the Coastal Carolina Chanticleers have gone from never having been in Omaha to within one game of a National Title. They face off against another underdog team this season, Arizona. Tonight’s game is going to be epic as the two teams have nothing to lose and will leave it all out on the field. Neither team was a National Seed and no one expected them to reach the Title game, so they are both playing with house money tonight. 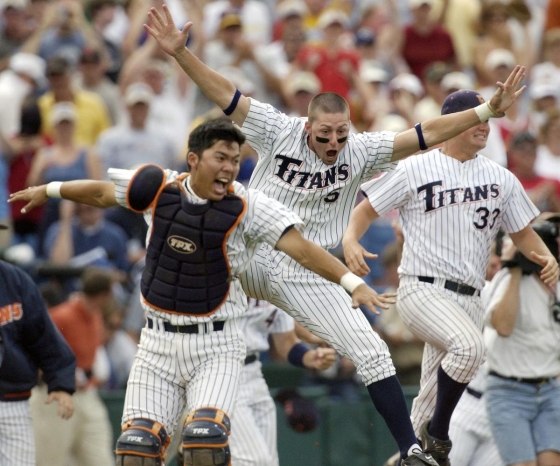 Texas scored two runs in the first inning and then, absolutely nothing else the rest of the game. They were dominated by Jason Windsor who only gave up three more hits the rest of the game. His dominance gave Cal State Fullerton the chance they needed for a comeback but they waited until the 7th inning before deciding to do so. 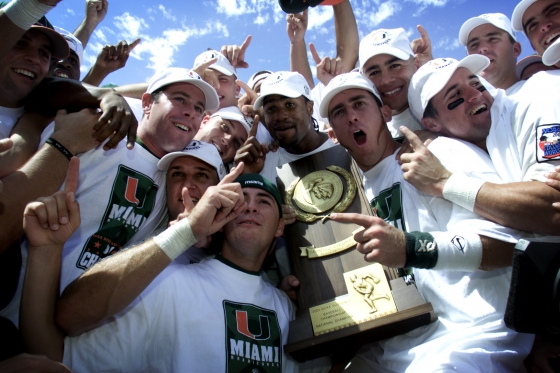 During the first season with a national seeding, the Miami Hurricanes finally returned to the spot they were in just a few years before when they watched LSU celebrate the 1996 CWS. They did not want a repeat of that and jumped out to a 6-2 lead over the Florida State Seminoles. However, during the 7th inning, the Seminoles got three runs to cut the lead to one and cause Miami fans to begin biting their nails. Michael Neu had better plans and he shut down the FSU club in the 9th inning, finishing with a beautiful strikeout on one of the greatest curveballs ever thrown in NCAA baseball history. 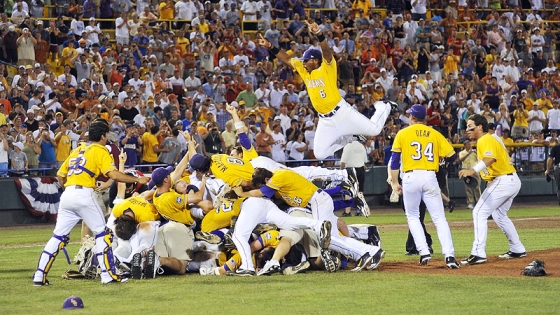 Another College World Series, another LSU Tigers team making an appearance. It wasn’t the dominating LSU squads of the past in 2009, it was a balanced experienced crew of young talent that saw a 6-4 deficit heading into the 9th as nothing more than a fun challenge they must overcome. So with two outs, runners on first and second, LSU needed something amazing from Sophomore D.J. LeMahieu and he delivered with a double down the LF line tying the game and giving LSU a chance to win it in the 11th inning. 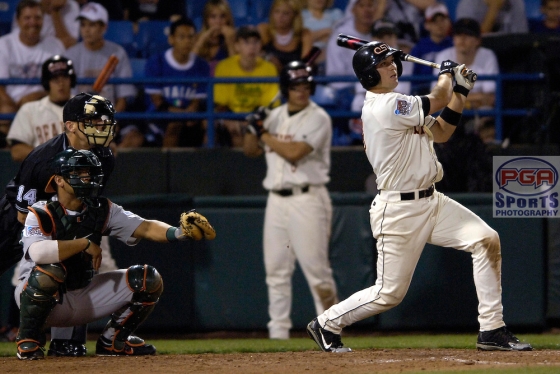 The entire series between unranked Oregon State and North Carolina back in 2006 was incredible. During Game one, the Tar Heels took a demanding 5-0 lead heading into the bottom of the 4th before the Beavers exploded with 7 runs to take the lead and never look back. Game two was another story as it took a UNC throwing error in the bottom of the 8th to give the Beavers a run that gave them the lead, which they never gave up again. 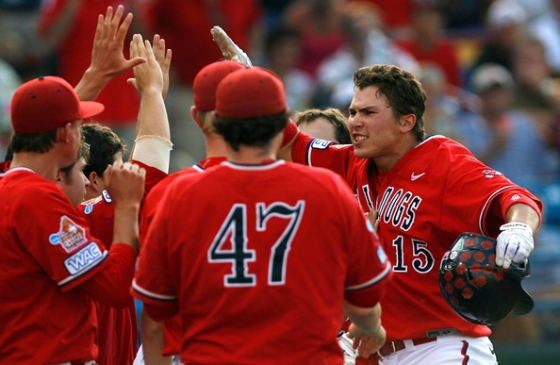 Fresno State and Georgia each had 3 runs before an 8th inning of scoring lead Georgia to a 7-6 lead. After Fresno State dropped a crooked number during the 8th, the Bulldogs were in panic mode as they watched a team that was almost not even in the tournament take a 6-3 lead going into the bottom of the 8th inning. But they fought hard and started to crush the ball until they took the lead back for good. 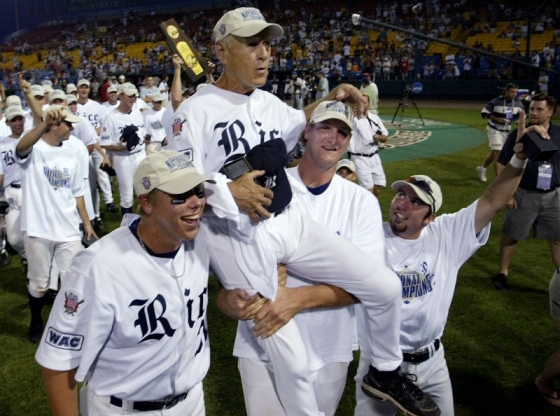 Stanford’s Freshmen pitcher, Kodiak Quick, let Omaha get to him as he tossed the ball wildly during a routine dribbler down the first base line, allowing Rice’s Chris Kolkhorst to score the game winning run from second base in the bottom of the 10th inning. 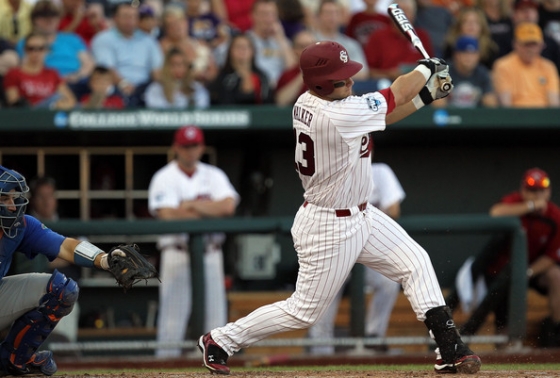 With only two hits in the game, and no runs, the Gamecocks of South Carolina were starting to look a bit outmatched by rival SEC East pal, the Florida Gators. But the team that never gave up in 2011, didn’t in Game 1 against the Gators either and Scott Wingo hit a single with two outs and a runner on third base in the Top of the 8th to tie the game and give USC hope of a title. It wasn’t long before the Gators collapsed and found themselves throwing the ball all over the field in the Top of the 11th, allowing the Gamecocks to score on back-to-back throwing errors leading them to an eventual title in Game 2. 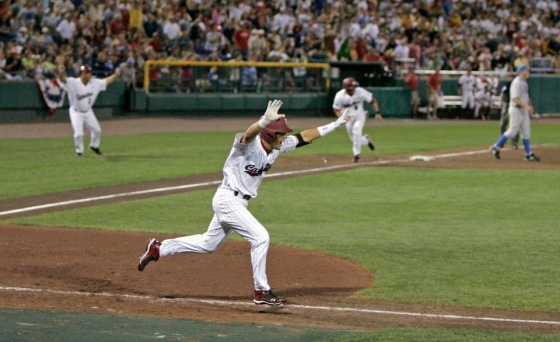 The UCLA Bruins got to the 2010 Championship on defense and pitching while South Carolina got there with everything else. The best team in the country was tied 1-1 as they went into the bottom of the 11th inning. Scott Wingo wasn’t a household name until he got on base and worked his way to third base and scored on a single that gave South Carolina their first title. 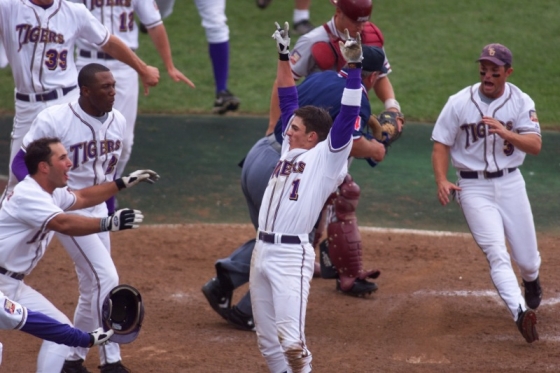 LSU’s chances for a fifth title in school history looked bleak as the Stanford Cardinals took a commanding 5-2 lead into the bottom of the 8th before a little magic started happening for LSU in Omaha, once again. The Tigers got home runs from Blair Barbier and Jeremy Witten in the 8th inning to erase a three run deficit and tie the game heading into the 9th. With Ryan Theriot standing on 2nd base, All-American Brad Cresse came to the plate with a chance at greatness. He was 1-12 in the CWS and had struck out the last two at-bats in the game on six total pitches. So he didn’t wait long and on the second pitch of the at-bat, he crushed a line drive single into left field giving LSU their fifth title in the last ten years.