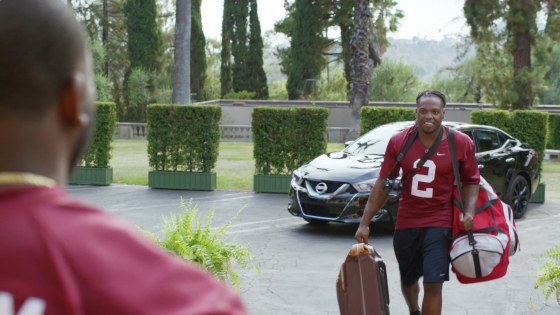 Nissan and ESPN are bringing back the Heisman House advertisement series with quick punch humor for 2016. A 90 second introduction begins the series with 2015 Heisman Trophy winner Derrick Henry joining this sixth season of the show. You can expect to see returning Heisman House greats like Marcus Mariota, Carson Palmer, Tim Brown, Tony Dorsett, and Doug Flutie, along with many others. Trophy winners from 1976 through to today are included in this “fraternity.”

The 2016 season will include a 90-second introduction spot that brings in new athletes to the Heisman fraternity, including the aforementioned Henry as well as Tim Tebow and Danny Wuerffel. There are now 14 Heisman winners in all featured in the various spots Nissan and ESPN have created to benefit the Heisman Trust charity. The first TV spot airs tomorrow, September 1 and the year will have a total of 9 spots plus the introduction.

Other videos include Go Deep, which has Doug Flutie revisiting a football play he’s best known for, the Hail Flutie:

In Rook, Charlie Ward takes Henry through a driveway filled with classic Nissan and Datsun vehicles.

It wraps with a hilarious episode titled The Derrick Henry Effect which you’ll just have to watch for yourself: