Sports > Other > No Bayne, No Gain for NASCAR

No Bayne, No Gain for NASCAR 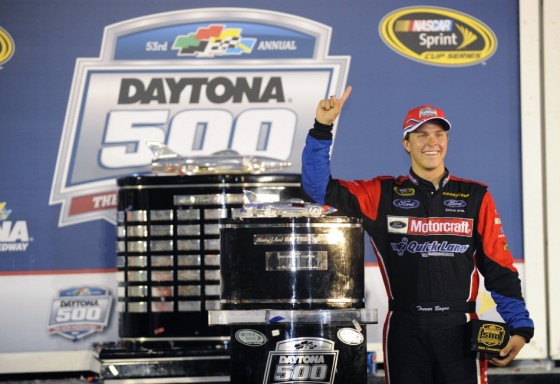 On a day that saw records broken for leaders, lead changes and cautions at Daytona International Speedway, it was only fitting 20-year-old driver Trevor Bayne captured the checkered flag. In doing so, he becomes the youngest driver to ever win the Daytona 500. In fact, this was only Bayne’s second career start inside a Cup car. Ironically, he did it in a car prepared by the sport’s oldest team, Wood Brothers Racing.

Bayne’s win was a throwback to the days when the playing field in NASCAR wasn’t overloaded with multi-car teams that had technical alliances that interconnected across the entire series. NASCAR needs to maximize this opportunity to positively impact the future of the sport. While television ratings for the Daytona 500 were up double-digit percentage points versus a year ago, there are several items to improve on so other young drivers can compete on the biggest stage in motorsports.

In today’s NASCAR, drivers like Bayne are rarely given a chance in the Sprint Cup Series. Established teams have demanding sponsors that want instant results, which is understandable given the large checks they are cutting. Smaller teams – the have-nots, if you will – are typically looking for drivers with experience in order to get their cars qualified. Under NASCAR’s often bizarre owners’ point system, the top 35 cars are locked into the field each and every week. That leaves room for just eight others to get into the party. A team that starts missing races could quickly find their organization behind the financial eight ball. There’s simply no margin for error or the time to spend on grooming a youngster for competition. When these overstretched teams can’t land a sponsor they often resort to start and parking. If they qualify for the race, they’ll run a few laps, call it a day early and collect their winnings on the way out.

NASCAR’s Rookie of the Year program is in such shambles right now that no driver is likely to qualify for the reward, even Bayne. Last year, with only one driver to challenge for it, Kevin Conway won the award by default with one finish inside the top 15 and an average finish of 32.6. At the start of the season, NASCAR officials mandated that drivers can only collect points for the championship in one of their national touring series. Since Bayne is only running a limited Cup schedule, he opted to have his points count in the Nationwide Series, NASCAR’s Triple-A equivalent.

Those Nationwide races are typically dominated by Cup drivers anyway. Like your favorite major league hitter playing in the minors, they hog up the spotlight and steal the big moments from what is supposed to be the up-and-coming talent. Still, track owners need to fill seats for these events and sponsors are demanding results. Once again, young drivers are pinched out of opportunities and seats to occupy. 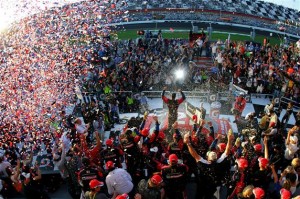 The intrigue that surrounds the 53rd running of the Great American Race had nothing to do with Dale Earnhardt Jr. qualifying up front and staying in the mix until a late wreck. Viewers didn’t stay tuned because of the new, similar points system that was introduced this offseason. Regardless of whether NASCAR realizes it, the 2011 Daytona 500 was a race that had the fingerprints of young drivers all over it and they were the biggest players in making the event such a success.

Bayne’s improbable victory was refreshing in every sense of the word for a sport that’s been dominated by those loaded with all of the best resources. In fact it was Bayne that looked like the savvy veteran. When facing the cramped quarters of three-wide racing, Bayne often backed out waiting for a prime opportunity to make the pass instead of forcing the action.

Regan Smith, one of the best drafting teammates all day, posted a career-best seventh-place finish for his small team at Furniture Row Racing. Earlier in the week, Smith pushed Kurt Busch to victory in one of the preliminary events and hooked up with him frequently in the 500.

David Ragan, who turned 25 in December, made a critical mistake during a late restart and likely cost himself his first Cup win.

Steve Wallace, son of former series champion Rusty, finished with a respectable 20th in his first ever Cup start.

NASCAR, like any sport, is its best when the small teams and the underdogs are in the mix. Allowing an environment to exist where the young talent so rarely gets the attention and opportunity is shortsighted and will prove toxic to future growth.

Bayne overcame the odds and became a national story. It’s now up to NASCAR to take this spotlight and keep it on young drivers. The Nationwide Series needs to become part proving ground and part testing lab in order to catch the attention of fans, sponsors and teams. Creating several dates that Cup drivers are prohibited from entering would be a great start. No one will be able to see the quality of show the kids can put on by themselves if they don’t ever get the chance.

If NASCAR stands still, pats itself on the back and only celebrates the short-term gains of a boost in television ratings, it will be a long time until we see a story as captivating as Bayne’s develop in the sport.