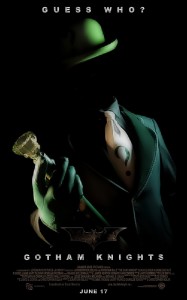 AwardsDaily has the story that there may not be a new Batman movie until 2013, and even then there are whispers that director Christopher Nolan might not be along for the third Batman installment. The delay has largely been attributed to the death of Heath Ledger, which rocked Nolan and took the wind out of his sails for an alleged Joker-centric third film. Of course, there are plenty of other villains out there that could be used to piss off Batman (i.e. the long rumored Riddler casting). But if Warner Brothers wants to take a little bit of time, I’m okay with that. I’d rather get a movie as good as The Dark Knight in five years, than a mediocre movie in two. Although my standards aren’t exactly high, as long as Batman doesn’t get an emo hairdo and strut down the street to “Stayin’ Alive”, I will consider it a smashing success.

To be fair, it would be nearly impossible to top The Dark Knight, both creatively and at the box office. Maybe Nolan should pull a George Costanza and walk out on top. “I’m out!” He is currently working on Inception, a sci-fi action movie with a star-studded cast that includes the likes of Leonardo DiCaprio and Ellen Page. And don’t worry, Michael Caine is supposed to be in it as well, making four straight Caine-Nolan collaborations and adding further fuel to the Caine–Hackman Theory.