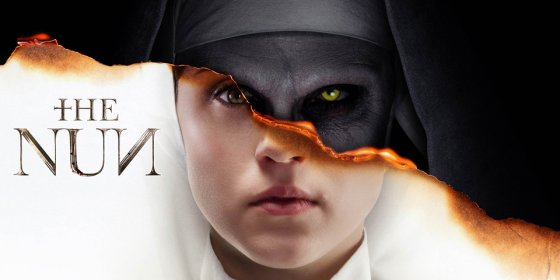 Author’s note: Before I begin my review, I would like to extend the sincerest of middle fingers to everyone who made our screening of The Nun difficult. I’m talking to you, o parent who thought it would be a good idea to bring a babbling one-year-old into the theater and wouldn’t leave until halfway through. This includes two people in our section ruining the film with every word so loudly issued from their mouths. Same goes to the guy who thought he was being slick and using his cell phone in the front rows. People like you are the reason going to the movies is such a hassle, so do us a favor: if you want to do all that stuff, stay at home. That said…

To understand The Nun, it’s probably best if you go back and rewatch The Conjuring 2 and Annabelle: Creation. Not only will you see the demon Valak’s (Bonnie Aarons) first appearances and witness the kind of havoc she can wreak, you’ll also have a much better time than you would with The Nun. Shallowly-scripted and overly reliant on haunted house-type scares, The Nun marks the second misstep in the five-years-old Conjuring universe (the first being Annabelle), beating its empty chest as it flatlines its way to its closing credits.

The trouble with The Nun starts with the three aforementioned preceding films, in that they’ve set a high bar for the kind of intensity and terror we’ve come to expect from this franchise. It’s not done through scares alone; there’s a gravitas and humanity to each film which straps us to our seats and makes the horror all the more gut-wrenching because we’ve come to care about their characters. Without that sense of attachment, all you have is shadowy figures darting out of view, ghostly heads peering out from behind tombstones, and makeup effects to differentiate the possessed from human, which is the cloth from which The Nun is cut.

You can almost see the perspiration on director Corin Hardy’s brow as he tries to maintain the chilling intensity James Wan (The Conjuring, The Conjuring 2) and David F. Sandberg (Annabelle: Creation) brought to their respective installments. However, three-time (and soon to be four-time) franchise writer Gary Dauberman’s screenplay doesn’t give Hardy much to work with, being painfully anemic and trite. Instead of being balls-to-the-wall original in its depth and scares, Dauberman’s work on The Nun feels more like what a major motion picture studio believes an audience wants out of a mass-market horror film. 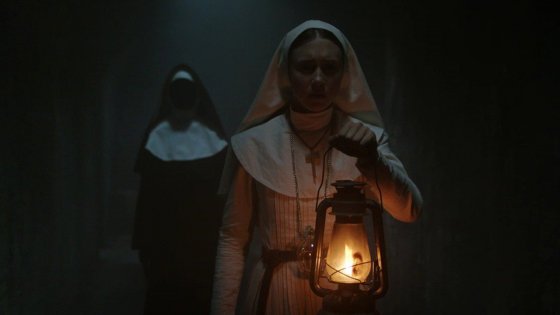 Do we want scares? Yes. But the horror inherent in most of the Conjuring series come from places where the mind fills in the missing gaps with the images of our worst nightmares. The Nun seems to be content with cheap frights, like mysterious figures in windows disappearing as soon as an observer turns their way. Or rotting, dessicated hands coming out of nowhere to grab the hapless victim whose silly, ineffective shouts of “HELLO?!” echo through cavernous stone halls seconds before. They even trot out the “little running kid who disappears and reappears” gag which has been done to death – no joke intended – in films since Nicolas Roeg’s Don’t Look Now.

The Nun is full of these tried-and-true horror chestnuts, giving this installment more of a Friday the 13th, teenagers-in-a-summer-camp kind of feel. Instead of one-and-done actors falling under Jason Voorhees’ machete, we’re dropped into the Abbey of St. Carta in Romania, where an artifact purportedly containing the blood of Jesus Christ (which looks an awful lot like the Holy Hand Grenade of Antioch) once stopped an ancient evil rising from the depths of Hell. Centuries later in 1952, after a young nun hangs herself at the abbey, the Vatican dispatches Father Anthony Burke (Demián Bichir) and novitiate Sister Irene (Taissa Farmiga) to investigate if the Church needs to intervene further. 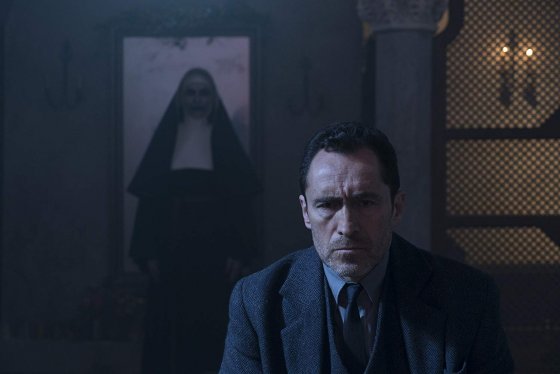 Burke’s a no-nonsense, gruff parent-figure whose personal history with demons hangs over his tired and weary soul. A botched exorcism involving a child named Daniel (August Maturo) has sent him into despair, which goes no further than the compulsory exposition he lays on Irene. Well, yeah, Daniel does come back to wreak supernatural vengeance on the good Father in an example of how Dauberman overtly deals with Burke’s character. Worse, Hardy doesn’t bother to mine more of an internal struggle leading to Burke’s possible redemption, choosing only to focus on surface appearances.

On the other hand, the wide-eyed (figuratively, this is not a comment on Farmiga’s countenance) and innocent Irene has been handpicked by the Vatican because of her gift of precognition. Much like Dauberman’s treatment of Burke, this trait is given the mandatory, Chekov’s Gun-like early reference and dropped almost posthaste, only to come in handy twice at the most opportune moments. Otherwise, she’s our conduit into the strange goings-on at the abbey, being privy to more supernatural action than Burke due to the separation of the sexes. Farmiga plays her eagerly and with care, but the script doesn’t give her more to do than be the “Final Girl” who chases every apparition after demanding to know “Who’s there?”. 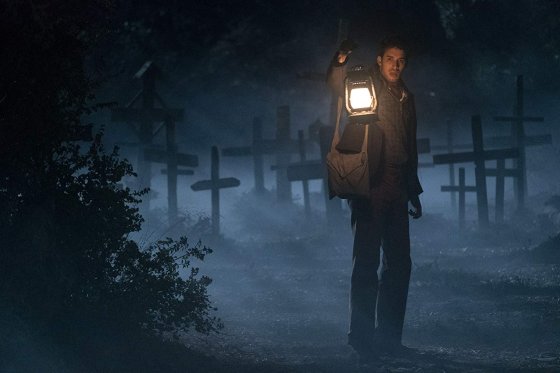 We’re also given something the Conjuring franchise hasn’t had to this point: blatant comic relief. It comes in the form of a French-Canadian man named – yeah, you guessed it – “Frenchie” (Jonas Bloquet), a local farmer responsible for finding the young nun hanging in front of the abbey. His ill-timed quips and profanity (never have I heard a more badly-placed “Holy shit!” in any film whatsoever) throw The Nun‘s tone and flow completely off, almost threatening to send the film into slacker-film territory whenever he’s around. He does serve a purpose leading to future events in franchise, but it’s made clear to us in the same haphazard, awkward way his character is shoved around in the entire film. 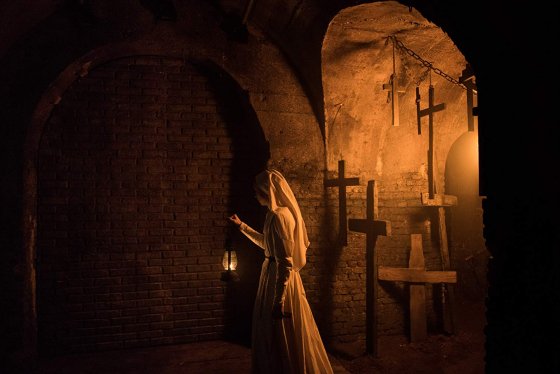 The film likes to play with Burke’s, Irene’s, and our own senses of reality. Characters disappear without a trace and reappear inexplicably; the abbey’s nuns are victims of this hackneyed attempt at dangling red herrings and wild postulation. One of the leads gets trapped rather suddenly in a coffin which is buried in the blink of an eye, seriously straining the audience’s suspension of disbelief. These “frights” go no further than the superficial and the obvious; we’re too quickly transported to the next action sequence and never given the chance to allow the film to get under our skins. 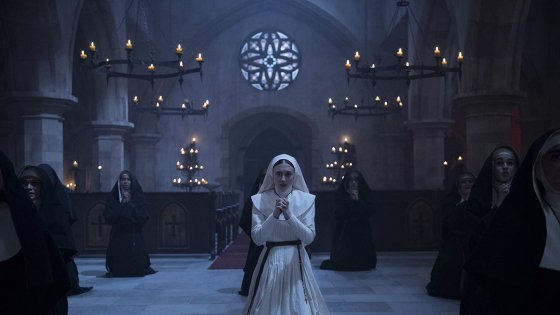 The Nun so desperately wants to be required franchise viewing; you can almost reach out and touch the muscles it’s flexing while trying to fit into the Conjuring canon. It’s full of terrific cinematography thanks to Maxime Alexandre, and Hardy maintains a cold, unwelcoming atmosphere throughout. But the screenplay’s lapses in logic, plot, and sheer continuity – I mean, seriously, what really happened to all the other nuns in the abbey? – irrevocably doom The Nun. It perfunctorily works as an origin story for the aforementioned Valak, but those seeking a more satisfying experience should look elsewhere in the Conjuring universe.

Shallowly-scripted and overly reliant on haunted house-type scares, The Nun marks the second misstep in the five-years-old Conjuring universe (the first being Annabelle), beating its empty chest as it flatlines its way to its closing credits.