An Ode to John Williams, the Movies’ Music Magician 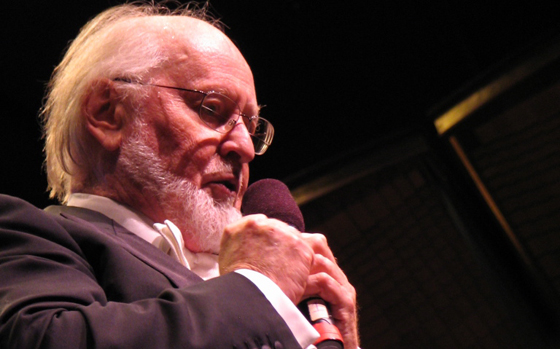 For the eighth time in his career, legendary film composer John Williams is up against himself in the Best Original Score category at the Academy Awards. Having composed War Horse and The Adventures of Tintin, Williams’ opponents this time are Ludovic Bource for The Artist, Howard Shore for Hugo, and Alberto Iglesias Tinker Tailor Soldier Spy.

Film score aficionados such as myself have long considered Williams the best in the business, not necessarily because every score he writes is an instant classic, but because his artwork consistently enhances every film it touches. Williams is a modern-day Beethoven and his scores will be appreciated for centuries.

Everyone has their own favorite Williams score (often the Star Wars theme), but those with a more vested interest have their own list of favorites that go beyond the most recognizable tunes. So now, I present to you, two Top 20 Williams Score lists, one from myself, and one from my friend and colleague, soundtrack expert Steve Cook (who knows more about this than me).

The main title is probably one of the most recognizable themes in film music history with the heralding brass and lush strings. The score began the rebirth of the grand symphonic sound played by a large orchestra in films. It’s a seminal score that would instantly make Williams the top Hollywood composer.

Who can forget that shark theme with its terror lurks feel? That theme established film music as an integral part of filmmaking.

For a movie about dinosaurs, the music cues from this score are quite the opposite from what you would think. Almost half of the cues have a soft, light and sensitive emotion to the music.

Beautifully written music to this emotionally-tragic score about the Holocaust. Itzhak Perlman’s violin solos throughout are superb.

5) Harry Potter and The Chamber of Secrets

Another one of Williams’ most recognizable themes, the "Theme from Superman." It’s like you’re really flying with the The Man of Steel superhero looking to do good deeds and succeeding.

One of the most underrated scores by Williams. Beautiful lush strings, great oboe and piano solos interspersed at times with narration from the film. Check out the "My Dad’s Stories" cue with its fabulous pizzicato string work.

8) Indiana Jones/Kingdom of the Crystal Skull

What a journey you’re taken on with this score, the best in the Indiana Jones franchise. From the opening "Raiders March" cue, you’re off for nonstop adventure and drama. Bold, brassy and frenetic music.

9) Close Encounters of the Third Kind

This score is a bit more atmospheric/mystical than what we usually hear from Williams, but outstanding nonetheless because it’s perfect for this type of movie. "The Wild Signals" five-notes motif cue in the communication with the aliens’ spaceship scene again states the case that music can be a significant player in films.

A signature score that’s emotionally exciting, tender and frightening with dazzling brass and string compositions. The "Escape/Chase/Saying Goodbye" cue is the piece de resistance of the score. Simply outstanding.

To think, we’re not even including non-film music Williams has composed on these lists. Here’s two classics:

The reason I'm picking Episode V over Episode IV is that it contains "The Imperial March" (Darth Vader's Theme), the second most iconic track in the series behind the opening title, and one that dogs have recently barked in Volkswagen commercials.

While Episode IV deserves credit for introducing the opening theme (while it's technically just rehashed for the other movies), as an entire piece of work, V > IV. However, IV contains "The Throne Room," which as far as I'm concerned can take the place of Mendelssohn's Wedding March without anyone really noticing.

What separates Schindler's List from other Williams/Spielberg collaborations is that it inserts another level of emotion in an otherwise already emotional film (as opposed to another level of excitement in an already exciting film). Williams also does this with Amistad and Munich, but ultimately it's Itzhak Perlman's violin that provides the soundtrack over the tears for the most important film that Spielberg has ever made.

This score is the epitome of a Spielberg/Williams collaboration. With multiple memorable melodies throughout, it's jam-packed with themes for each mood of the film - the scary, the exciting, the silly, the heartfelt, the sad. With no sequel to be made and thus no opportunity to expand on these themes, Williams lets it all out here. The special effects of this film will age, but the music will not.

4) Indiana Jones and The Temple Of Doom

Like how Star Wars Episode IV gave us the Star Wars theme, Indiana Jones and the Raiders of the Lost Ark gave us the Indiana Jones theme (Raiders March). And like how Star Wars Episode V gave us the "Imperial March," The Temple of Doom gave us "Slave Children's Crusade." While this track isn't used exactly the same as the "Imperial March" in Empire Strikes Back, it's catchiness with the dark undertones has the same effect, and elevates this score over the other Indy scores.

5) Harry Potter And The Prisoner of Azkaban

I haven't seen the Harry Potter films (until I make time to read the books), but I HAVE heard the music, like a true soundtrack geek. And since I can't put in perspective which track goes to which film while casually listening to random scores and skipping over boring ones, I let my iTunes data make the decision here. Seems that I've been enjoying tracks from Part III over the others (Williams only composed the first three). I've also mistaken parts of "A Window To The Past" for music from Schindler's List (listen yourself and see if you hear the similarities).

This is a film that folks want to like more than they actually do, because this disturbing historical event ended up becoming a courtroom drama that didn't draw the emotional responses that they would've expected from Spielberg. But Williams still delivered with the score, giving a soundtrack for Out-of-Africa slaves in the 1800s by relying heavily on a choral chants.

Even though the title The Phantom Menace was the first bad omen prior to its release, Williams's "Duel of the Fates" (also released ahead of the film) told us that something epic was about to happen. Though this movie kicked off a trio that ultimately disappointed long-time fans, no one walked out thinking it was Williams who botched it. If anything, "Fates" and tracks such as "The Arrival at Tatooine/The Flag Parade" enhanced this Jar Jar Binks-led disaster.

It's the theme, and only the theme, that makes this score because no one remembers any other part of it. I've always thought if Williams had been inspired to write this music while scoring the Star Wars main theme, it would've worked just as well (although the Star Wars theme probably wouldn't have worked the same for Superman).

Here's another score that is underrated due to the absurdity of the film, even with a typical Williams prologue and a cheesy child's song, "When You're Alone." Ultimately, it's the tracks "Presenting the Hook," "The Banquet," and "Smee's Plan" that you'll be whistling along to on your all-Williams iTunes mix.

I'll be goofed on for this pick considering it's typically off the radar for lists like this, but when you actually listen to what Williams composed out of context with the distractions of a prepubescent Macaulay Culkin outwitting Joe Pesci and Daniel Stern, you'll hear exactly what Williams does best. His heavily Christmas-themed score sometimes adds a tone that enhances the seriousness of an otherwise slapstick film. John Hughes could've used Looney Tunes music for this but instead added a layer of quality that's often lacking in family comedies.

Why not Fiddler on the Roof, a film he won an Academy Award for? He merely enhanced an existing score (besides, in this case I actually prefer the stage soundtrack). Why not Jaws? The genius of Jaws is the collaboration between Spielberg’s shark and Williams’ music. One without the other just doesn’t work (like Psycho‘s shower scene without the shower). The rest of the Jaws score is merely okay.

On to the Oscar prediction. No statue for Williams this year (nor Howard Shore for Hugo), not because of the lack of quality in his music, but because the Academy only rewards him for films that go above and beyond what he normally does. After all, his victories are for films that are themselves classics: Schindler’s List (1993), E.T. (1982), Star Wars (1977), Jaws (1975), and Fiddler on the Roof (1971) which was actually an adaptation of the stage performance. Considering he’s been nominated 42 times (plus six more times for Best Original Song), he’s only got a 15% win ratio so far (though he technically has a 40% shot this year).

Here is a complete list of Williams’ film scores.

John Williams Is the Man