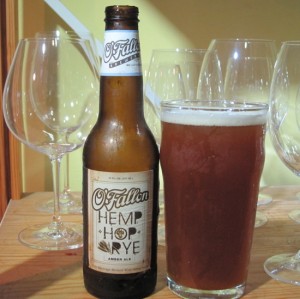 Information: Site – “That’s right, there’s hemp in this smooth and polished-tasting amber ale. To be specific, we use hemp seed – one of the oldest and healthiest of ingredients – to create a subtle toasted nutty favor that compliments the hops and rye. We use Cara Rye and Malted Rye for a subtle spiciness and rich ruby color and Victory Malt to tie together the flavors with a nuttiness that compliments the hemp seed flavor. German Hallertauer hops add seasoning and we finish with Cascade hops for a crisp citrus aroma and taste. This wide assortment of flavors form a harmony together, creating a uniquely smooth and flavorful everyday beer that isn’t overwhelming.”

A beer. Brewed with hemp seeds. Are you kidding me. This is like some kind of bizarre dream where all of my favorite things are mish-mashed together and I get rhubarb pie pillows and cars made out of peanut brittle. Beer and pot seeds… color me stunned. I don’t know why I am even waiting to open this…

It’s sort of a muted red-pink color… I guess one might call it salmon (but I’m color-blind, so it’s friggin pink), either way, it’s certainly a pretty beer. The head is relatively light, despite its frothiness, and recedes rather quickly leaving behind a pretty nice lacing that etches the inside of the glass like so bizarre writing. The immediate scents are heavily nutty and malty with a hint of butteriness and some slight hay characteristics. It is definitely an interesting parade of smells, all of them quite nice. Oh, and just so you know… for those in the know… yes, I suppose, at some level, there is, in a small way, a hint of smoked pot. What can I say, I know the know… ya know?

The taste is roasty, toasty, and quite nutty; not belaying the nose in any fashion, so that’s nice. The brew has an interesting home-brewed feel to it, almost as if I’d just gotten it out of someone’s private basement collection. It’s a bit dry in the mouth, but that only serves to beg the taste buds for more. Oddly, though one does get the hemp-type smells, there really is no discernible ‘pot’ flavor… ya know, that kind of wet rope taste you get after huffing a J… it’s not really there. But, you can sort of feel it in the little buzz you get. Yes, it’s the typical beer buzz, but there’s something else there too sort of like a contact-style buzz… some of you will know what I mean. All in all, it is very tasty and, well, it makes you want to snack… so I guess that’s the food pairing you get this time: snacks.