When Toyota asked us if we wanted to fly out to Las Vegas to test drive their 4-wheel drive vehicles in the dirt and rocks of Red Rock Canyon, then head out to Breckenridge to do the same in the snow, we were packed before we hung up the phone.

Once the dust (and snow) had settled, there were two vehicles that stood out most: The FJ Cruiser and the 4Runner Trail Edition. (Well, and the Land Cruiser, but at $80+K, it’s a little out of reach for most of us.) Here’s what we found: 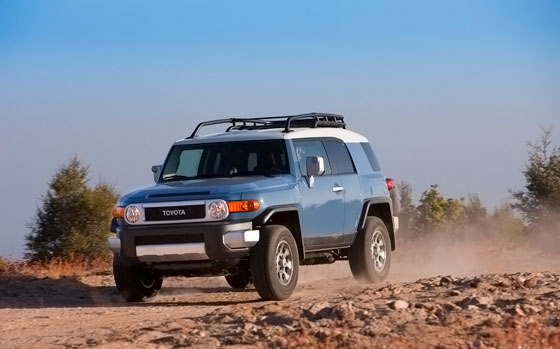 It’s no secret we dig the styling on the FJ Cruiser. It looks like a giant Tonka truck, and it’s one of the few SUVs/CUVs that still looks like it was built to take on rugged terrain, instead of taking the kids to soccer practice. Huge, odd-shaped, bug-eyed—yet tough and capable of handling most anything thrown at it—it’s the truck love child of Rodney Dangerfield and John Wayne. Throw whatever gear you’ve got in it, or whatever you’re riding on the trail or lake on top of it, and you’re good to go. Leave the sleek styling to the metros trying to decide what color flannel is correct to wear fly fishing in March. 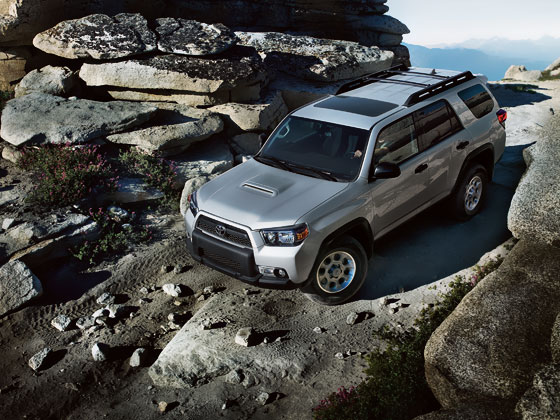 The 4Runner has a pick-up-with-a-huge-cap look (it’s built on the Tacoma frame), and the Trail edition we tested gets beefy front and rear bumpers, dark smoked headlamps, and a hood scoop. There are no frills here. No swooping shoulder lines, no fancy flourishes… this is a truck first and foremost. And it’s unapologetic about it. 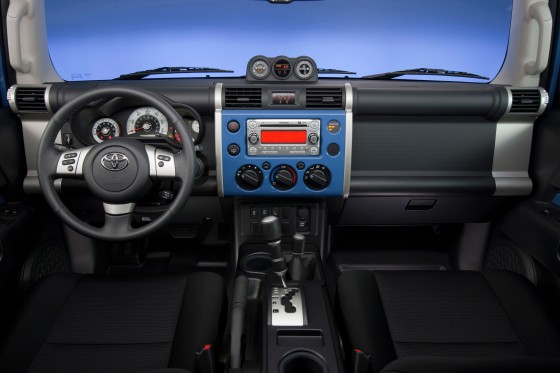 Sliding behind the wheel, both vehicles let you know right away they were built with the trail in mind. “Refined” isn’t a word that would come to mind. But then neither is “primitive.”

The FJ comes with cloth seats that are water repellant and a heritage-inspired dash with body color-keyed upper and lower metal. No “soft-touch” materials need apply. And all the knobs are larger than normal and surrounded by a material that’s easy to grip, so you can work them even when you’re wearing gloves.

The model we tested had the Convenience package that includes keyless entry and a backup camera. It also had our favorite feature: A floating ball multi-information display on the dash that includes a compass, inclinometer and temp gauge. They make you feel like you’re off-road even if you’re just in the supermarket parking lot. 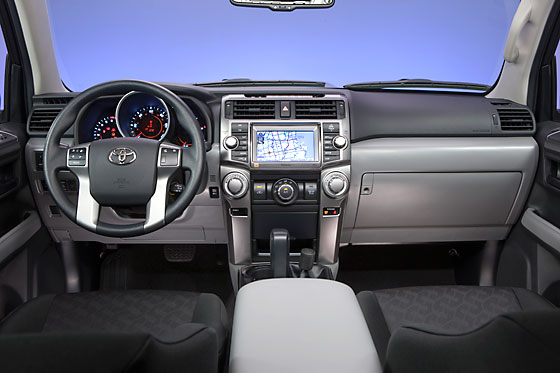 The interior of the 4Runner Trail models is built with dirt, mud and muck in mind too. The seats are also water repellant (the Limited trim line gets leather seats standard), and the gauges feature the same over-sized and grippable knobs as the FJ. 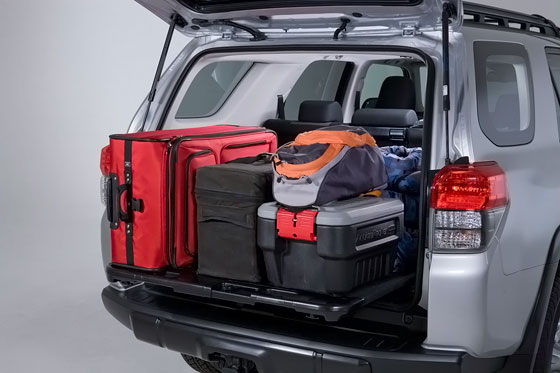 The extra touch we really liked on the Trail edition is the slide out tray in the cargo area. Rather than have to lock your knees against the bumper and try to drag your bike, skis, or other heavy gear out of the back, with a quick flip of the release you simply slide the entire cargo floor out to you. Pure genius, and something we wish had when we were trying to pull that keg out of the back of a car in college. 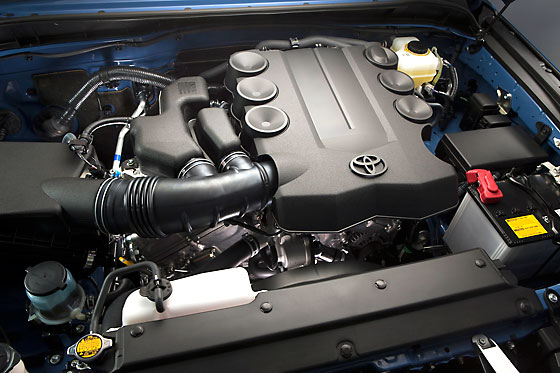 The FJ comes with a 4.0-liter V6 under the hood, pushing out 260 horses. And it needs ’em all to power this big boy over rocks and up steep hills. Not that the FJ is sluggish. It’s pretty responsive for a large fella, and it’ll tow 5,000 lb. capably. But just keep in mind this vehicle is built for off-road fun, and not off-the-line speed. We loved taking it out in the canyons and in the snow, but it really is most fun using its standard 32-inch tires to climb up and over stuff. The biggest complaint we’ve heard from FJ drivers is the gigantic blind spots—visibility wasn’t one of the primary considerations apparently—but it didn’t bother me as much. We were too busy looking at the inclinometer to see how steep the grade we were climbing was. And we figured lesser cars could definitely see us, so let them get out of our path.

The FJ has nearly 9-inches of ground clearance and is a fairly tall vehicle, so we didn’t try to push the G’s into the corners. We figured you wouldn’t enter a Clydesdale into the Kentucky Derby, why try to treat the FJ as an Indy car. We were happy to bounce it around the canyons and plow it through snow. 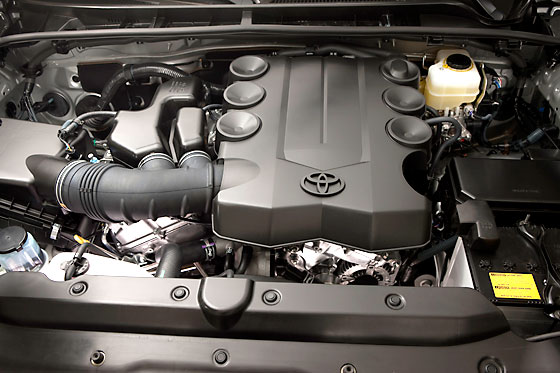 The 4Runner has a more refined ride than the FJ, and really capable handling. Even though the 4Runner outweighs the FJ by over 450 lb. its 270 hp 4.0-liter V6 felt more responsive. And it was just as comfortable on the pavement as it was in the dirt. We asked a few of the car wranglers who were with us on the trip, all of them professional drivers and racers, which of the Toyota 4WDs we were testing they liked driving best, and all of them answered 4Runner as their top or in their top two. (Land Cruiser again.) Same for us.

The Multi-Terrain Select system lets you dial in wheel-slip control to match the terrain you’re on. If you’re traversing loose ground like mud and sand, more-than-normal wheel slip is permitted, allowing wheel-spin to work in the your favor. On bumpy moguls, or solid rock, wheel slip is minimized and the system acts more like a limited slip differential. The Mogul setting is for any extremely uneven terrain, such as V-ditches, slopes, and ridges. Basically it lets you play in anything. 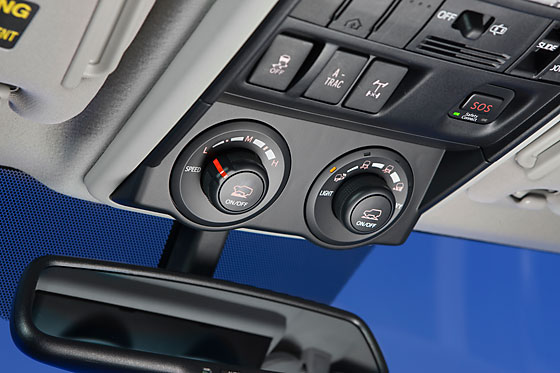 Our favorite is the Crawl Control (CRAWL) feature. When you’re shifted into low range, CRAWL takes over the gas and brake pedals, regulating engine speed and braking force to move the 4Runner over rough level ground or steep inclines, while all you do is focus on steering. The first time you try it, it goes against all instincts to keep your foot off the pedals, especially overcoming the base desire to want to stomp on the brake as you descend a 30 degree grade. But after a couple of tries you wish you had this on every vehicle.

If you feel a regular urge to turn off the highway and see what’s on the other side of that ridge, either one of these vehicles will get you there and back safely. If you want a more refined daily driver, the 4Runner takes the edge, with the FJ best suited for adventure weekends. The FJ starts at $27,030, but will go north of $30k with the toys in it. The 4Runner Trail is more pricey, and starts at $37,155, but comes with a good amount of extras packed in it. That doesn’t mean you can’t keep adding them on—the model we tested had a sticker in the $44k range.

If you’re in the market for the FJ, get to your dealership quick. For a few years now there’s been rumblings that Toyota is going to discontinue the line, and the rumor is its time may have finally come to an end. As for the 4Runner, there’s an all-new version coming for 2014 to be released later this summer, so you might want to hold out and see what the designers have in store.