Offensive Metaphors About Menstruation (As Loosely Outlined By Movies) 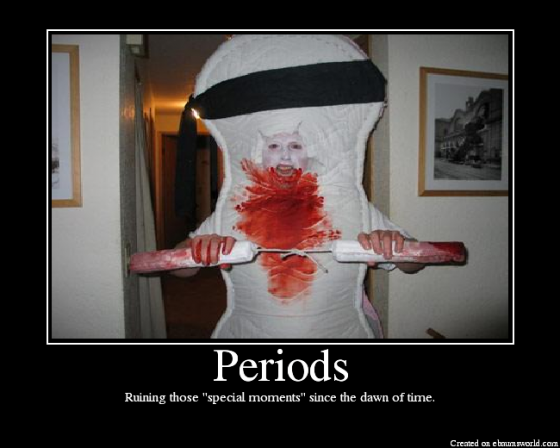 Periods. Do guys really want to know all about what’s going on down there? No, no we don’t. We’d rather form our own hairbrain conclusions based on famous movie scenes and absolutely nothing.

Lesson: Don’t discount the potentiality of a chick’s flow to ruin and uproot early twentieth-century upholstery. Gotta bolt that shit down and wrap it in plastic, fellas.

Lesson: The magnitude of a girl’s telekinesis is directly correlated to the volume of her flow. Probably.

3
The Exorcist – “Fun With a Crucifix”

Lesson: In the unlikely event that a bunch of dudes develop female organs and get their periods at the same time, there’s only one way to know which one is the amorphous, parasitic dogbeast. Also, don’t fuck with Kurt Russell.

Lesson: This girl is too young to even start menstruating, and her scorn transcends death and all solid matter. Think about it.

Currently, there aren’t any clips of this one on Youtube, so if you haven’t seen the movie you’ll have to just settle for this pic of Natasha Henstridge straddling Alfred Molina. In this scene, Henstridge’s alien-human hybrid character coerces Molina into unwittingly impregnating her for the sake of her species…then kills him.

Lesson: There’s a reason girls don’t want to have sex on their periods, and it mostly involves both not wanting to introduce alien life forms to the planet, and killing you. Also, she’s probably self-conscious about her scales.

Lesson: The paralells between menstruation and lycanthropy are easy– a woman’s body going through a “change” according to a monthly cycle, kind of like the cycle of the moon blah blah blah. The point is that any person walking the earth without a Y chromosome is possibly a werewolf, and if they bite you, prepare for a life of battling sexy teenage vampires and kinky inter-species sex.