By Michael Parsons on December 9th, 2016

Pay no attention to the man with his pecker in the 3D printer…. behind the prostitutes and phallic egg nog ice-luge is a sweetheart of a movie. Good-natured misfit Clay (T.J. Miller) runs the Chicago division of a tech company that his buttoned-up CEO sister Carol (Jennifer Aniston) threatens to shut down if they don’t meet an unrealistic quota. In order to pitch a game-changing technology to a $14 million client (Courtney B. Vance), Clay rallies with freshly-divorced Chief Technology Officer Josh (Jason Bateman) and his developer Tracey (Olivia Munn) to—you guessed it—throw a Christmas party to end all Christmas parties. With rumors of layoffs and bonus cuts, office morale isn’t exactly high. Nothing a truckload of booze and a little cocaine won’t fix. Unleash those pheromones…next thing you know, the marketing department is having an orgy in a bathroom stall and people are swinging from Christmas lights. 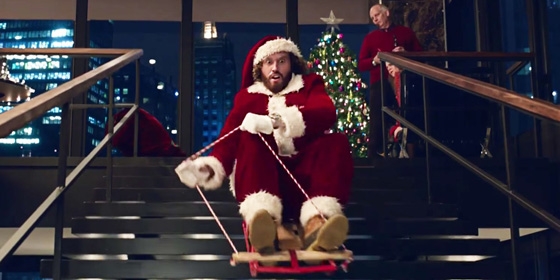 A mostly funny concept from Jon Lucas, Scott Moore and Timothy Dowling, turned overly wordy screenplay by Justin Malen & Laura Solon & Dan Mazer and directed by Josh Gordon and Will Speck (all in one breath), there are just enough laughs here to squeak by for the 105 minute run time. Office Christmas Party is essentially Tommy Boy for more (or less) mature audiences—a man/boy unfit to run a corporate office who steps up to save his employees— otherwise fairly typical of the this past decade’s X-Generation adult comedy boom, to which Bateman, Miller and Aniston have collectively made a sizable contribution. OCP has more than its fair share of explicit material, mostly extensive verbal elaboration/improv (a.k.a., run-on comedy), male nudity and a borderline disturbing depiction of child neglect. And of course, we can’t seem to escape that requisite dance-off sequence. Why? I continue to ask. This one actually has several. 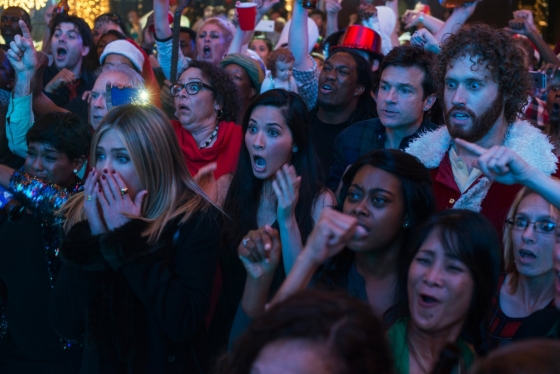 Taking place in a high-rise office building, the flick has a couple of Die Hard references—the set bears striking resemblance to that film after all the dust settles—Office Christmas Party is more or less what I expected, re-casting Horrible Bosses co-stars Bateman and Aniston in pretty much their same characters. That’s okay, because this movie is funnier— in no small part due to Olivia Munn, playing the ridiculously sexy tech nerd with a slight attitude. A romance brews between her and Bateman, but that’ll have to wait while they save the boss from getting robbed and jumping the Chicago River in a sedan. Kate McKinnon as HR party-pooper and Rob Corddry as a disgruntled employee fill out the healthy comic roster.

Behind the prostitutes and phallic egg nog ice-luge is a sweetheart of a movie.