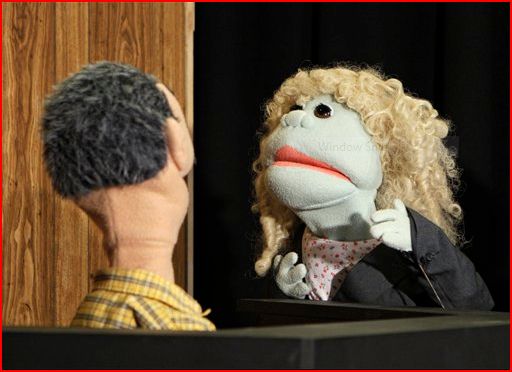 A Ohio TV station didn’t let the banning of cameras from the courtroom during a bribery trial prevent them from covering the story. Rather than bitch and moan, they came up with an ingenious solution to the problem.

With cameras barred from a high-profile corruption trial, a television station has puppets acting out the sometimes-steamy testimony about hookers, gambling and sexually transmitted diseases. In one scene, a furry hand stuffs cash down the shirt of a puppet prostitute.

“A furry hand stuffs cash down the shirt of a puppet prostitute.” I think it’s fair to say this might be the greatest sentence ever written in the history of journalism. WOIO news director Dan Salamone sees nothing wrong with employing this technique.

“It’s not intended in any way to replace any of the serious coverage,” Salamone said.

Really, Dan? I guarantee he said that with a wink and a nudge.

The station has enlisted a local puppet company to put on the skit. It calls the tongue-in-cheek segment “The Puppet’s Court.”

In a word: awesome.

A talking, buck-toothed squirrel “reporter” provides the play-by-play in an exaggerated, “you won’t believe this” tone. A black-robed puppet sits at the judge’s bench. And in the jury box, the puppets yawn during the trial.

Lock me up and throw away the key because I’m guilty of loving this idea to death. Let’s face it, local news blows. The only reason people watch it is for weather. The rest consists of murders, car wrecks and politics that the average person could care less about. It’s obvious what they need is more puppet shows, especially ones where furry hands stuff cash down a puppet prostitute’s blouse.