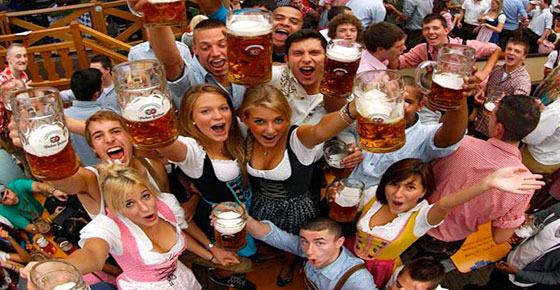 Oktoberfest is one of our favorite global events, and it wrapped up yesterday in Munich, Germany. While it’s easy to focus on the beer, babes, and boobs of Oktoberfest with those fabulous dirndls, the festival goes well beyond that. The origin of the event dates back to 1810 when Crown Prince Ludwig was married to Princess Therese and the people of Munich were invited to attend the festivities. Only beer brewed within the city limits of Munich can be served at the festival.

The taps were flowing and the oom-pah bands were oom-pahing again in Germany at the world’s largest festival celebrating beer. It is a 16-day festival running from late September to the first weekend in October with more than 6 million people from around the world attending the event every year. To the locals, it is not called Oktoberfest, but “die Wies’n”, after the colloquial name of the fairgrounds (Theresienwiese) themselves.

We’ve put together this gallery of scenes from the 2013 Oktoberfest, to give you an idea of just how massive and fun the festival really is :