Media > Movies > Once Upon A Time In Hollywood : Review

Once Upon A Time In Hollywood : Review 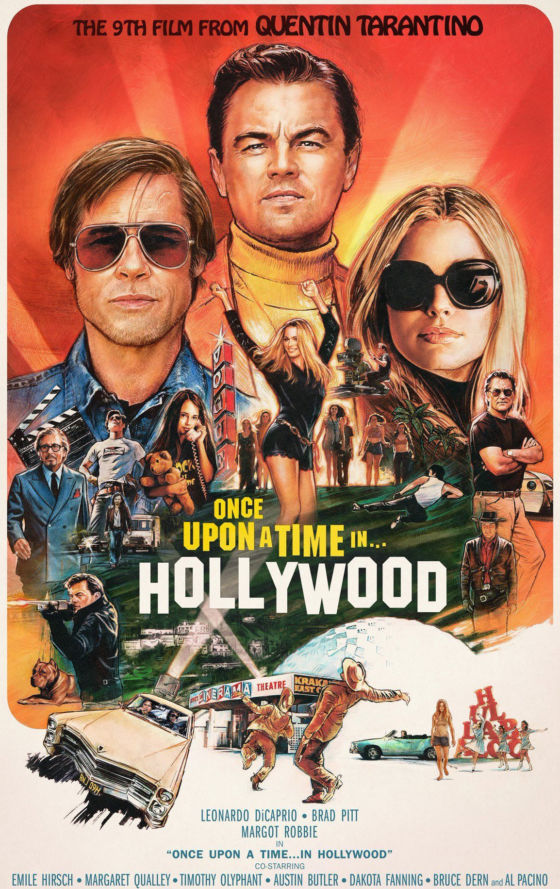 The title of this film says it all: Quentin Tarantino has made his own version of a fairytale in every sense of the word itself, full of archetypes and staples of the children’s stories we were read at bedtime. The valiant heroes, the evil villain, and the journey everyone must take to receive their just deserts – all of it is blended smoothly into a terrific-tasting mélange with his unmistakable imprimatur. However, this is a different side of Tarantino we’re seeing here, as it’s a more introspective turn he takes at the helm for Once Upon A Time In Hollywood. Yes, his typical sass, time-jumping, and feet shots (oh, God, the feet shots) are present as always, but we find him playing more to spaces and allowing his period piece to breathe and be, especially since it’s a period his work has long referenced. 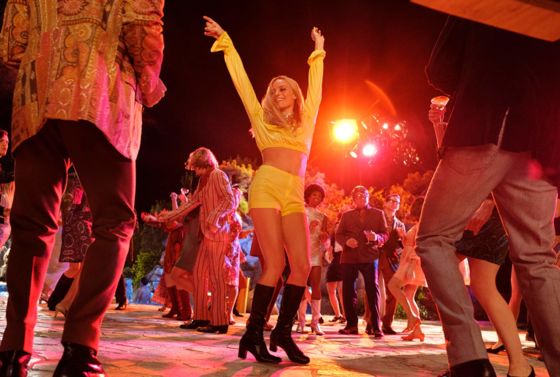 Twenty-five years after Pulp Fiction changed our lives, Once Upon A Time In Hollywood finds Tarantino at his most laid back, mostly due to our foreknowledge of the Sharon Tate murders. Sharon, as played by Margot Robbie, is still in love with Hollywood and the movies; we see her going incognito to a screening of her latest film and being lifted up by the audience’s reaction to her klutzy character. Her spritely innocence and charm break through for the briefest of moments, and we expect more will be made of her and her career throughout this film. But she winds up a minor character, only present to give context to the film and to give us mournful hope. Best of all, she gives cinematographer Robert Richardson’s camera a sunny remembrance of a woman with her entire life ahead of her, with the events of August 8, 1969 out of sight but lurking in our minds. 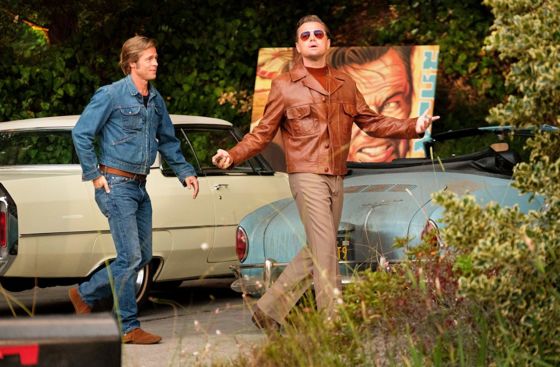 The knife is on its way; it’s only a matter of time before it finds its mark, yes? As this is another one of Tarantino’s revisionist fantasies where he seeks to right all of humanity’s wrongs (killing Hitler in Inglourious Basterds, slavery in Django Unchained, post-Civil War America in The Hateful Eight), all bets are off. Instead, we’re treated to a rock-’em-sock-’em tale of a fall from grace and the redemption which follows. It’s a buddy movie featuring an action hero and his stuntman/best friend struggling to find work after the former quits his popular “Wanted: Dead or Alive”-esque television show. Tarantino keeps our focus solely on Rick Dalton (Leonardo DiCaprio) and Cliff Booth (Brad Pitt), chronicling the best and worst moments of their 9-year partnership over the film’s 161 minutes. We laugh some, we cry some; but most of all, we smile a lot while we see both of them fumble around their everyday lives. 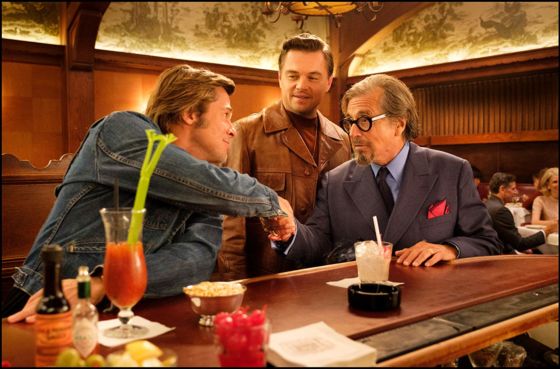 Rick’s film career never took off after quitting “Bounty Law,” a show in which he plays a stone-cold bounty hunter akin to The Hateful Eight‘s John Ruth (played by Kurt Russell, who also appears in this film). Now, he’s bouncing around television playing weekly bad guys, a move which has him despairing; his “best by” date has come and gone, and his only hope might be in Italian spaghetti westerns, which he detests. The old days of “the studio system” – actors and tradesmen were contracted to studios before becoming relative freelancers – have bitten him and left a mark, and his glory days are over. Even his agent Marvin Schwarzs (Al Pacino) sadly recognizes this, causing Rick’s nervous stutter to become more prominent during their conversation, eventually driving Rick into a crying jag. 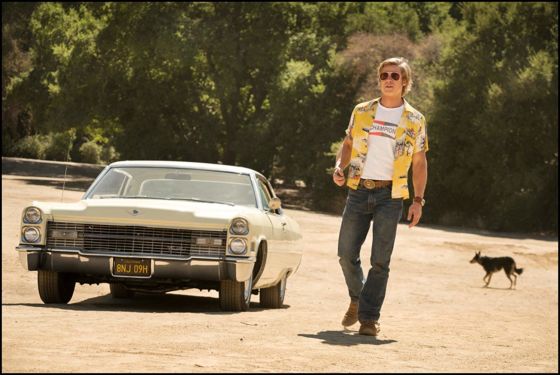 But there, as always, to pick up the pieces is Cliff, the stalwart who can’t give up on him. As Cliff, Pitt nails the matter-of-fact, devil-may-care attitude made famous by Hollywood stuntmen, a cocksure grin on his face and the balls to back it up. Of course, he’s got unspeakable baggage, a large chip on his shoulder which he bears seemingly well. Three times, we see him taking risks which might result in dire consequences – believe you me, the third time’s the absolute CHARM – and one of these instances ties the film’s danger directly to the Rick/Cliff main story, and you can probably guess correctly how the film’s going to end. 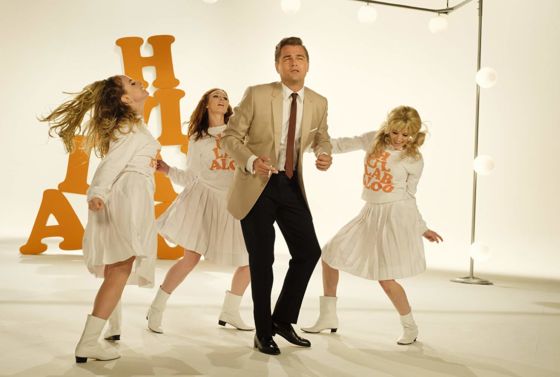 It’s the getting there that’s the good part, though. The purpose of Once Upon A Time In Hollywood is to lay the groundwork for the epilogue-like final act, where all the stories intertwine and where Tarantino’s penchant for bloody, shocking violence comes roaring to the fore. This allows us to take every frame of this film as a sonnet only he could have written and dedicated to the ’60s. If you’re lucky, find a 35mm showing of this (or a 70mm showing for you lucky bastards in Hollywood, New York, Chicago, San Francisco and Toronto) to experience exactly how Tarantino intended this to be seen. Cue marks (referred to by Pitt in Fight Club as “cigarette burns”) have been replaced by simulated recurring “print damage,” and the faded, late ’60s color schemes and iconic imagery come spilling off the screen in star-studded rivulets. It’s an eternal twilight in which this film lives and breathes, inseparably marrying color palette and thematic material. 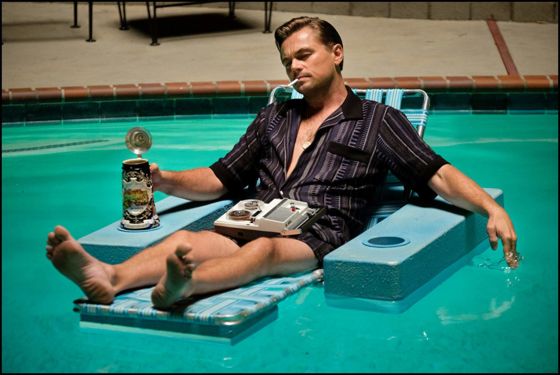 Tarantino dials himself back from his usual wordy screenplays and mind-bending dialogue, letting simplicity reign between his characters and allowing the camera to do the talking. We’re taken from West L.A. to the Vasquez Rocks and everything in between, with Robert Richardson’s frames and John Dexter’s art direction shimmering and glowing, tempting us to drink every last drop of it in each edit. One almost wishes it was this film Tarantino chose to shoot in Ultra Panavision 70, not the bottle episode confines of The Hateful Eight. Granted, the Ultra Panavision 2.76:1 frame was used well there, but the location shots of Once Upon A Time In Hollywood alone cry out for a wider expanse. A stunning long take highlights an impassioned performance by Mike Moh as Bruce Lee, complete with a well-choreographed bit of hand-to-hand combat (with some humor at Lee’s expense not to be taken seriously). And one particular sequence featuring DiCaprio and Timothy Olyphant is captured beautifully, with the camera dollying between the two and the lighting’s just… perfect. 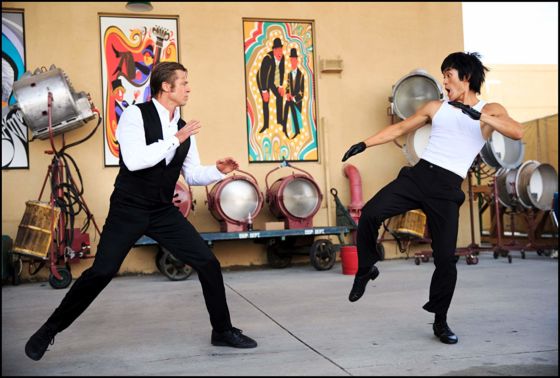 That’s what Once Upon A Time In Hollywood is: a look at perfection. During this period, we had all sorts of political and world strife. The Cuban Missile Crisis; the assassinations of John F. Kennedy, Malcolm X, and Martin Luther King, Jr.; the Civil Rights Movement; the war in Vietnam. Throughout it all, Hollywood was there to provide us with the escape we needed. The murder of Sharon Tate heralded the end of a certain period of innocence, and our knowledge of it drives the tension of Once Upon A Time In Hollywood. We’re wondering if Charles Manson (Damon Harriman) or members of his “Family” are going to be coming around the corner in his beat-up ice cream truck, stalking her like Michael Myers in Halloween. They’re only in plain view when Tarantino wants us to see them, which makes this film all the more maddeningly tense. Switching between the Rick/Cliff story and her non-story (as far as the film goes) keeps her in the game without being an active player, and that’s a large part of this film’s magic. 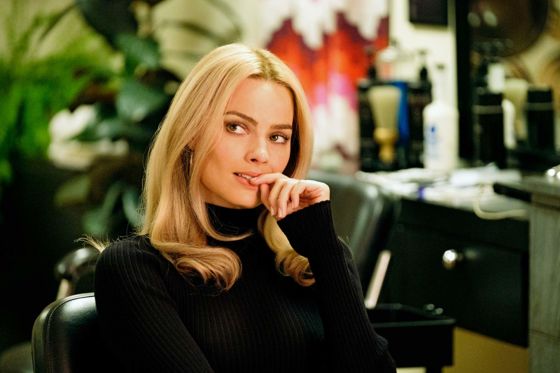 The endlessly watchable duo of Rick and Cliff are responsible for the film’s heavy lifting. For a large part of the film’s second act, they’re separated and on their own adventures, but their struggles somehow bear similar weight on the set and in the real world. Rick is tearfully reminded through his conversations with an 8-year-old actor (a superbly precocious Julia Butters) that he’s a falling star, but he somehow manages to pull it together and show them how it’s done; Cliff gets in over his head when he visits old friend George Spahn (Bruce Dern) on his ranch. Throughout it all, these two remain the only true things about Once Upon A Time In Hollywood, where the price of glitz and glamour goes unseen by the viewing public. Rick and Cliff are two fairly normal guys in the most abnormal place you can be, and this film is just as much a celebration of their friendship as the era in which they’re living.

Once Upon A Time In Hollywood

Once Upon A Time In Hollywood is a radical departure for Quentin Tarantino's usual wordy, mind-bending screenplays. Instead, he lets the film breathe, bathing us in unforgettable imagery and performances.