One Time Jets, One Time 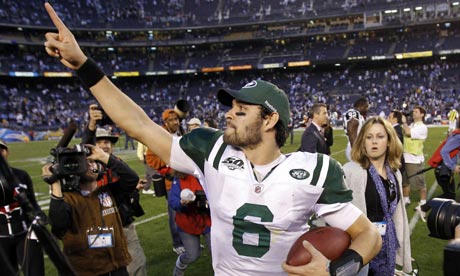 The time has come... right?

I figured becoming a contributor for Gunaxin would come with a certain destiny, a means to an end.  I guess it’s only fitting the first article I write for this site would be after one of the most euphoric, satisfying, and amazing win in my Jets lifetime.

I have been on this Earth for close to 23 years and in that span the Jets have always been disappointing.

My fandom commenced in November 1994 sitting in my family room as Dan Marino managed to dupe the Jets on a fake spike play that lives in infamy.  I sat in the upper deck in 1996 as the moribund Jets took on the same Miami Dolphins.  At 1-14 and on the cusp of Richie the K’s resignation from the team, of course the Jets would be able to pull one out to finish the year.  After taking an early lead, they pulled the usual tricks and let Marino win the game.

(At least karma got Marino back with Ray Finkle.)

Bill Parcells came in, taking the horrendous Jets and made them legitimate, nearly making the playoffs a year after 1-15.  A mistimed Richie Anderson halfback pass separated them from a spot in the playoffs.  The next year was euphoric, a 12-4 record and a home playoff win against Jacksonville.  They even led 10-0 in the 3rd quarter against the Broncos in the AFC Championship game, only to let it slip away on the feet of Terrell Davis and Vinny Testaverde’s distinct ability to throw backbreaking interceptions.

Herm Edwards came in and had the team contending for a playoff spot yearly.  Surely the mantra “Same Old Jets,” or SOJ, would be put to rest with this sudden competitiveness.  That was a load of crap.  After a miraculous win in San Diego during the 2004 Wild Card round (thanks Nate Kaeding!), the Jets held a 17-3 lead on the road against the 15-1 Steelers.  Two Doug Brien misses in regulation, one hitting the crossbar, ended that in flames.

And now, for the second consecutive season, we are asking… 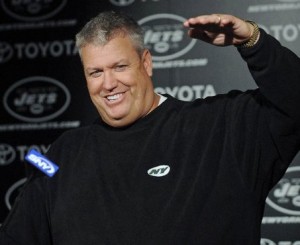 Brett Favre came in and there was an actual excitement with the Jets.  The Jets were the “it” team for the first time in my life.  Surely even the Jets couldn’t screw this up.  Going 8-3 to start the season, the season predictably fell apart and the Jets finished 9-7, out of the playoffs.  This is when it all changed.  Rex Ryan gets hired, the Sanchize becomes the fifth-overall pick and the Jets have a new identity.

Surely the Jets couldn’t screw this up.

After a 3-0 start, uneven play had the Jets sitting at 7-7 after a devastating late season loss to the Falcons.  SOJ was alive and strong and we, the Jets fans, had become resigned to yet another heartbreaking finish.  But something crazy happened: a big break in Indy and at home against Cincy got the Jets into the playoffs and a wild ride to the AFC Title game.  Even in defeat, you knew there may be a culture shift.

Talk all  the trash you want against Sexy Rexy but this team has an identity, something the organization never really had.  Winning hasn’t been improbable but expected.  For Jets fans, January 23rd, 2011 marks a tipping point for the team.

Do we shed SOJ forever or does it continue?  Will we be let down again or will we finally bask in the glow of a Super Bowl trip?

And now we’re here.  23 years has culminated in a legitimate chance to erase the demons and finally turn the page to the golden age of Jets football.  The time is now, so I ask the New York Jets to just get it done… just one time…

One time for Dennis Byrd, who would give his heart and soul to be out there…

One time for any fan under the age of 50, who has never seen the Jets play in a Super Bowl, let alone win it..

One time for all of my loyal Jets fan friends, who live and die by the outcomes of this mostly moribund franchise…

One time for me, one of the most loyal Jets fan out there…

Make it worth the pain and anguish, followed by a celebration befitting a king.