OnLive: The Future of Video Games 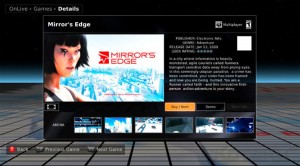 CNET: OnLive, which was started by WebTV founder Steve Perlman and former Eidos CEO Mike McGarvey, is aiming to launch a system–seven years in the works–that will digitally distribute first-run, AAA games from publishers like Electronic Arts, Take-Two, Ubisoft, Atari, and others, all at the same time as those titles are released into retail channels. The system is designed to allow players to stream on-demand games at the highest quality onto any Intel-based Mac or PC running XP or Vista, regardless of how powerful the computer.

The system will also stream games directly to a TV via a small plug-in device, and players can use a custom wireless controller as well as VoIP headsets in conjunction with it.

According to Perlman, OnLive’s technology will make it possible to stream the games in such a manner–high quality, no matter what kind of system the user has–by virtue of a series of patented and patent-pending compression technologies. And instead of requiring users to download the games, OnLive will host them all and stream them from a series of the highest-end servers. Users will have only to download a 1MB plug-in to get the service up and running.

This is bad news to Sony, Microsoft, and Nintendo, who have invested billions of dollars in console-based video game business. On the contrary, third party video game developers such as Electronic Arts can benefit a great deal from OnLive if their business model becomes successful. For the past few years, developers have been hurt by the difficulties in making games for PS3 and Wii, leaving Xbox 360 the only console that they can make money from. So far everything sounds promising, I’m going to give it a try this winter once they go public.