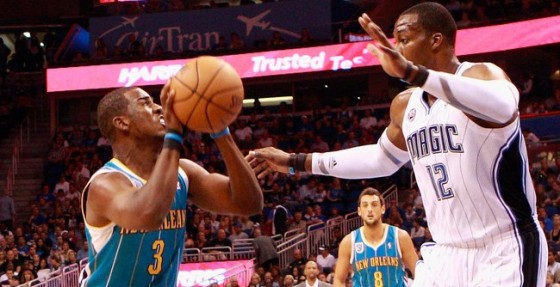 The NBA is in turmoil because Dwight Howard and Chris Paul want to win a championship but that’s nothing new. It’s just an incontrovertible fact about professional sports: Except for professional cycling, players say that the ultimate goal of theirs is winning a team championship and that nearly everything  else (i.e. pride of a job well done, a scoring title, civic pride, making it far in the playoffs, etc.) is secondary.

Team Lance Armstrong and No One You've Ever Heard Of

The striking thing is that they all share the same belief system and the keyword here is all. You’ll never see an athlete at a post-game interview saying “Yes, the team lost, but I’m pleased with how I did” or “Yes, we lost in the 3rd round of the playoffs, but hey, isn’t that so much better than losing in the 2nd round?” Aside from having the effect of making nearly all sports interviews boring, this is also a pretty good tip-off to the fact that all athletes deliver that same clichéd line about wanting to win a championship because it’s what their handlers want them to say.

Take LeBron James’ reasoning when he went to Miami: “I know that I’ll never be considered among the greatest whoever played the game unless I win an NBA championship.” Look closely here, kids: He didn’t say he wanted a championship but that he was just trying to fulfill people’s expectations of him as a “Great player.” When the Decision came out, people hated LeBron’s character for all kinds of reasons but LeBron doesn’t really have any character to criticize.

The stakes are too high for him to be anything other than what people want him to be. When it comes down to it, the only thing we can really hate LeBron for is simply misinterpreting the mandate of the people: Apparently, LeBron learned that the people rank being true to your hometown above winning a championship. But how could he tell? All we kept yelling in his ear for seven years was “Win a championship or you don’t measure up to our expectations.”

All NBA players including Dwight Howard and Chris Paul are basically of that mold. They generally got this far by being highly obedient to their coaches’ visions and highly driven to be champions. Free-thinking adults who deduced that winning could be defined on their own grounds would mostly be weeded out of the system (that certainly explains our fascination with Ron Artest).

As a result what we have are superstar athletes responsible for selling their image to the public, they are relying on us to define what it is they should be aiming for. So with that in mind let me address Dwight and Chris right here and now.

Hi there, I’m a fan of you both. Not necessarily of your intellect or the way you’re handling yourselves at the moment, but you both can do things with a basketball that I can’t.I know you both have worked hard to live up to my expectations and be champions but I think there’s been a misunderstanding.

I can’t speak for the other 4,532,042 NBA fans out there, but going on childish tirades,  whining about the organizations you’ve been part of for your NBA careers, and demanding to be traded is actually not going to make me like you more.

Yes, it’s true that being on a team with Kobe or Deron Williams could get you a championship which is the golden ticket to making everyone love you forever. Or at least, that’s what you’ve been hearing from all those radio commentators who keep having endless discussions about where you rank alongside other greats who have won championships. Do yourselves a favor and don’t listen to them. They’ve lost track of reality.

Yes, a championship is nice but I’d prefer professionalism and sportsmanship. Dwight, you take a lot of pride in inspiring kids. Is your hope that kids will follow your example and riot against their Little League coach if the team doesn’t finish first and demand a trade to the team with the muscly thirteen-year olds?

In reality, there are 30 teams and 29 of them can’t be champions. In reality, not everyone can be on Kobe’s team or Deron Williams’ team. That’s just simple math. Someone’s going to get Jameer Nelson and Marco Bellini as backcourt mates. So whether you guys jump ship or not (by the time, this article has been published), realize that you might be losing more than you’re winning.