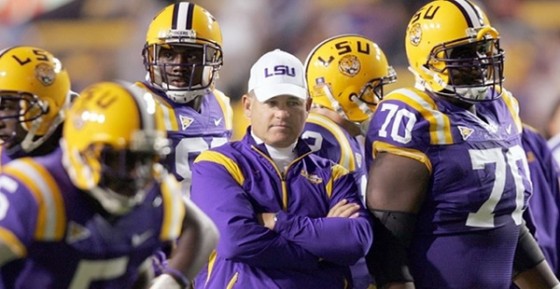 Ever since I was old enough to understand what rooting for your favorite sports team was all about, I was a fan of LSU athletics. My love for LSU sports became a passion. During football season, there was only one place to go on a Saturday night in Baton Rouge, to Death Valley, where the chance of rain is 0%. I spent many nights losing my voice cheering for the Tigers, both home and away.

My earliest memory was in 1997 when I witnessed the LSU Tigers upset the top ranked Florida Gators, 28-21. It was the only time LSU defeated Florida during the Steve Spurrier era and the first time they upset a top ranked team, ever. I was there in 2000 when UAB shocked everyone and beat LSU by a field goal. In 2011, I traveled to Arlington, Texas and watched LSU defeat Oregon’s high powered offense.

I remember the Bluegrass Miracle against Kentucky in 2002 when the entire Kentucky team was already celebrating and even dumped Gatorade on coach Guy Morris before the game was over. Then, when no one was expecting it, Marcus Randall tossed up a Hail Mary that was tipped by two Wildcat players before being caught by Devery Henderson for the score.

I was lucky enough to get tickets to see LSU beat Oklahoma in the 2004 BCS National Championship game in the Louisiana Superdome. The Dome was mostly LSU fans that have been waiting over 50 years for this moment. To say it was amazing would be under selling the moment.

But this is not just about me and my passion for LSU sports. This letter is to discuss the rumors that you are going to fire Les Miles at the end of the 2015 season. The biggest mistake you and the LSU athletics department can make is to fire Les Miles. It is a dangerous precedent to set for this program’s future success.

If a man with the second most wins in school history can get fired after two bad seasons, what does that mean for the next guy that takes his seat? Les Miles might not be perfect and his play calling is a bit outdated, but he is our coach. He is the best LSU has ever had at the position and his numbers prove it. Here are a few of the highlights I wanted you to see before making your decision: (Les Miles’s LSU Head Coaching Ranking)

Mark Twain once said, “Facts are stubborn things, but statistics are pliable.” He was right. Statistics aren’t to be trusted. They can be manipulated to help anyone make a stronger point. In sports, however, statistics are used to measure success. If they weren’t and the measurement of success was simply how many Championships you win, than the College Football Hall of Fame would be a very lonely place.

Have you ever heard of Bill Snyder? He was inducted into the College Football Hall of Fame this year. Bill Snyder has been the head coach at Kansas State for 24 seasons and has never won a National Title. In fact, he only has 2 Big-12 Conference Titles in his career and has lost 6 or more games in a single season 9 times.

Les Miles has the same number of Division titles and Conference titles as Coach Snyder. The only difference is that Les Miles owns a coveted National Championship. One of the best recruiting tools any college football coach can possess is being able to sell himself. Les Miles is one of the best in the country. Sure, LSU has become an elite football program with amazing facilities that sell themselves but these kids being recruited are all being told the same things.

Les Miles has the track record to ask a recruit if he would like to play a couple seasons and win a National Title or two while in college or would he rather learn how to become a better football player so that when the NFL comes calling, he will be ready.

Nick Saban and Urban Meyer might have a couple more National Titles than Les Miles but what neither of them can promise a kid in high school is a future beyond college. Les Miles can. He can show them how playing for LSU and playing for him might get them a title or it might not. But it will give them the best chance to make it to the NFL. Recruiting will fall off the map if you fire Les Miles.

If you plan on firing Les Miles, at least give the fans a better reason than he has lost a few games this season or that he can’t win a National Title every year. Do you not remember LSU in the 90’s? Between 1989 and 2000, LSU lost 69 games, an average of nearly 7 losses per year. Since you joined the LSU family in 2008, Les Miles has 76 wins, 4th most in the NCAA. He has also made an appearance in the BCS Title game, his second title game appearance of his coaching career.

Can I also mention the 2011 season was one of the most amazing regular seasons in college football history? LSU had 8 wins against ranked opponents, three of which were against teams ranked in the top three, by an average of 22 points per game. Les Miles was the coach that had the Tigers within four quarters of the greatest season in football history. Not the other guy that so many people keep comparing him to.

You remember Nick Saban, right? He came to LSU in 2000 and helped them win a National Title in 2004. However, what the fans seem to be forgetting about is in his 5 seasons with LSU, he lost an average of 3 games per season.

If you fire him because he can’t figure out how to beat Nick Saban or the Crimson Tide, then you have forgotten about LSU’s history against Alabama. Bear Bryant is the best college football coach in Alabama’s history. Like Nick Saban, he too beat LSU regularly. LSU only managed to win 4 games against Bear Bryant of the 20 times they played one another. Most of which were not even close.

Les Miles earns $4.7 million a year as LSU’s head coach. That seems like a lot of money but it isn’t compared to the rest of the SEC. In fact, his salary is behind Nick Saban (Alabama), Kevin Sumlin (Texas A&M), and Hugh Freeze (Ole Miss). Besides Nick Saban, don’t you think Les Miles has done more for LSU than either Kevin Sumlin or Hugh Freeze have for their schools?

I am not asking you to pay him more money, I simply wanted to mention that firing Les Miles will cost you a lot of money and not just from his contract buyout. The next guy will want more than $4.7 million to take the job in Baton Rouge, I can guarantee that.

Finally, I wanted to tell you how poorly you handled this entire situation. ESPN allowed Joe Schad to file a report that claimed there was a ‘very good possibility’ that LSU was going to fire Les Miles and buy him out of his contract based on one source.

It is no secret that ESPN is more worried about being the first to report the story than making sure it is actually true. So when this story broke, sport fans from all over ran with it. They took it as fact and waited for the official word from you. It never came. Here we are a few days later, still no word from you or your office.

In this situation, your silence has tarnished the LSU athletics program. By not saying anything, good or bad, right after the story broke, you are giving the media more time to run around screaming about the truth behind the rumor. Since the story broke, LSU has already lost two future commitments including a fan favorite, the so-called savior at the QB position for LSU, Feleipe Franks.

Speaking on behalf of the LSU fans that understand that winning a National Title every year is unreasonable, I beg you not to fire Les Miles.

He is our coach.