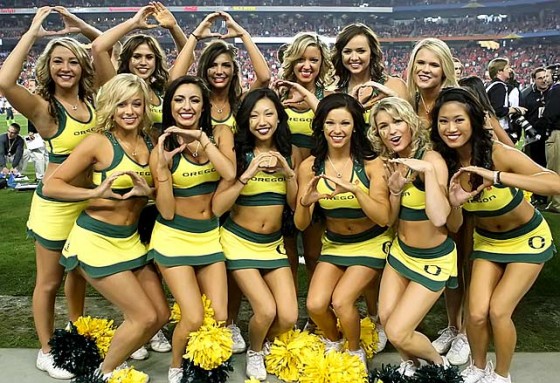 Since 2009, the University of Oregon’s football team has been on an absolute tear with an overall record of 70-10. During that time they’ve won numerous Pac-12 titles and even had a BCS title game appearance. Their scoring is off the charts and their fast-paced offense is one of the most organized in the history of college football. To date however, they have 0 National Titles, which could change tonight.

Tonight the #3 ranked Oregon Ducks (13-1) take on the #5 Ohio State Buckeyes in the first ever CFP Championship in Arlington, Texas. While the game is sure to be epic, we have a feeling something else will catch your eye during the broadcast…

Aside from their high level of play, the Oregon Ducks continue to lead the fashion world in number of uniform designs in a season. But that is not what we’re referring to, is it? Nope, not one bit.

It is the cheerleaders that roam the sidelines. The ones that make us all wonder what choices we made in life to be sitting at home watching them on the TV instead of speaking with them in person. Now don’t get any crazy ideas people, these women are about as far from your league as Adriana Lima or Gisele. Just make sure to enjoy the collection we bring to you today.