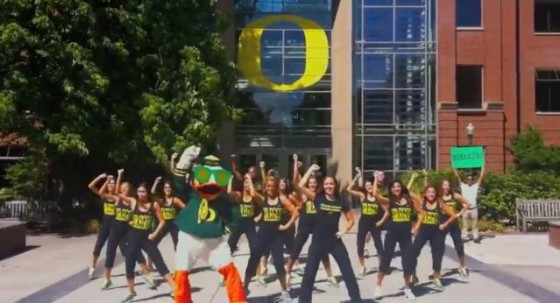 I think people finally got sick of “Call Me Maybe” parodies after the… (counts on fingers) first one, so The Duck (I guess that’s his full name) and others from the University of Oregon decided to replicate the “Gangnam Style” video by PSY that is currently tearing up Youtube.

Normally, parody videos get kind of old (again, looking at you, “Call Me Maybe”), but if everyone who does one of these puts in as much effort as this group (the editing is really impressive), I’d be totally OK with that. Even parodies have to have some quality to them.

Also, the presence of Oregon cheerleaders is a very strong selling point. Seriously, keep your USC Song Girls, because I’ll take the Oregon cheerleaders over them any day. It was interesting though that they edited out the word “sexy” before lady. You would think Oregon would be a bit more progressive than that, it’s not like they went full sexy like this version :