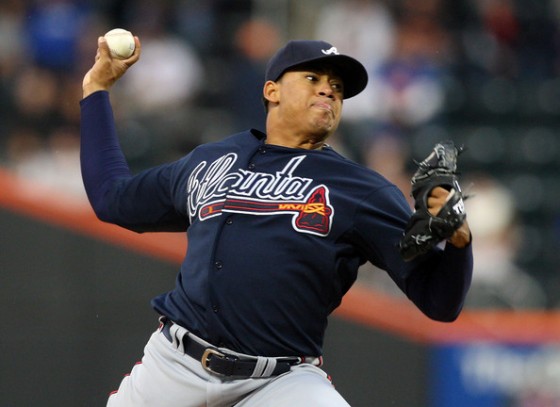 The Baltimore Orioles have agreed to a contract with free-agent pitcher Jair Jurrjens according to CBSSports.com. Jurrjens will make a base salary of $1.5 million for the 2013 season with the chance to earn an additional $2.5 million in incentives. The move follows Orioles’ GM Dan Duquette’s penchant for low-risk/high-reward transactions.

Jurrjens is coming off a disastrous 2012 season with the Atlanta Braves. The 26-year old right-hander went just 3-4 with a 6.89 ERA in 10 starts for the Atlanta last season. His struggles earned him a trip to Triple-A where he went 4-6 with a 4.98 ERAS in 14 starts. Jurrjens finished third in the Rookie of the Year voting in 2008 and was an All-Star as recently as 2011 when he went 13-6 with a 2.96 ERA and a WHIP of 1.22. Baltimore is banking on pitching guru Rick Peterson and pitching coach Rick Adair rounding Jurrjens into pre-2012 form. Jurrjens will be given a chance to win the fifth starter job during spring training.

Baltimore has been criticized by fans and media for failing to aggressively improve the ball club through trades and free agency this winter. The Orioles, who lost to the Yankees in the ALDS, have seemingly failed to capitalize on the momentum of the franchise’s first playoff appearance since 1997. The addition of Jurrjens has the potential to be a terrific move, but fans will rightly criticize the team for bargain hunting rather than taking bold moves to upgrade the on field product.

Baltimore has been rumored to be interested in bringing back lefty starter, and playoff hero, Joe Saunders. The two sides have failed to reach an agreement to date and the addition of Jurrjens likely ends the pursuit of Saunders. The veteran left-hander is believed to be seeking a three-year contract as a free agent. With young starters like Dylan Bundy, Kevin Gausman, and Zach Britton waiting in the wings, the Orioles may not have a need for Saunders beyond 2013.