Sports > Football > Other Guarantees Made by DeSean Jackson

Other Guarantees Made by DeSean Jackson 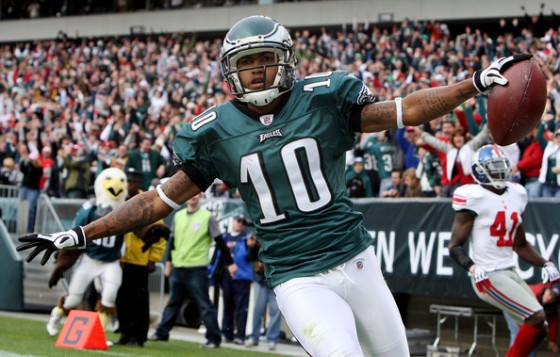 Full disclosure: I am a Philadelphia Eagles fan… alright, you can stop laughing now. I get it, they suck. Ha-ha, the “Dream Team” flopped. Okay, you’ve had your fun. Can I continue, please? Thank you. As I was– hey, who threw the Kevin Kolb jersey? Was it you in the back? Not cool, bro. Someone could have suffocated from the stench of failure.

Anyway, the Eagles, who aren’t exactly ignorant of selfish wide receivers who pout and point fingers, rewarded little man behaving badly DeSean Jackson with a 5-year, $51 million contract on Wednesday. And to no one’s surprise, Jackson’s first order of business as a newly contracted millionaire was to open his mouth and say something stupid.

He “guaranteed” the Eagles will win a Super Bowl in the next five years. Ugh. Even Vince Young thought that was a bold statement. Listen, guarantees are like assholes nowadays. They carry little to no weight — unless uttered by a problem child like DeSean. Then they become immediate media fodder — like a pack of hyenas descending on a wounded water buffalo.

Rather than drop my jaw and pound my fists, I’ve decided to take the high road. Here are some other guarantees made my Mr. Jackson.

I like DeSean, I really do. I just wish he’d drop the prima donna crap. It’s unbecoming.