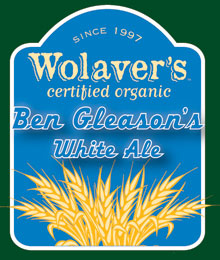 Info: “Ben Gleason has been growing organic wheat for twenty eight years at his farm in Bridport, Vermont, just ten miles from our brewery. Our brewers have combined Ben’s organic raw wheat, organic rolled oats, and organic 2-row malted barley. The resulting golden brew is then mildly spiced with organic coriander and orange peel and fermented with an authentic Belgian yeast to create this complex and refreshing white ale. A fitting salute to Ben Gleason. Available in 6 pks, cases, and draft for the summer.”

I don’t go out of my way to search out organic products, so when I was offered the opportunity to try an organic beer, well, needless to say I was more than intrigued. Before I even open the bottle, thoughts of preconceived notions of what organic beer is going to taste like swim through my head, but, much like monsters and creatures under my bed, I can guarantee they’re unfounded. The first smell after the cap is cracked is absolutely grassy and wheaty, which stands to reason judging by its ingredients. The pour is a pale yellow with a whisper of a head and even more of that ‘outdoors-y/waving wheat’ aroma. It’s such an interesting smell that is so overpowering that it’s hard to distinguish if there is another, secret odor beneath. Well there is: coriander and just a tinge of orange.

The flavor is quite unexpected: light, heavy on the grassy notes and the duo in the wings of the spice, coriander, and the citrus rind. If you can picture a slice of nice bread slathered in marmalade minus the jam’s obtrusive orangeness, you can get an idea of what this beer tastes like. This is not a white ale I’m used to, and I am so glad. Nothing screams ‘one of the flock’ like a copy-cat brew, and this selection is indeed not. I like it’s characteristic lightness, yeasty overtones, and citrus finish quite a bit that I’d like to seek out something similar, but I doubt I’d even come close. This is a tasty beer, and if you didn’t know it was organic, you’d never even think twice, even though that is a high point for sure. Drinking this beer with anything but, perhaps, a rich cheese course in place of a dry white wine is criminal. However, if you’d like it with a meal, this is another that would go well with a sea food dish: clams, oysters, the like. Very, very nice indeed.

Rating: * * * *
White ales are often comprised of fruit and wheat as their backbones, but this choice is in a league all its own.