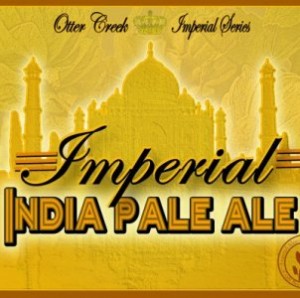 Info: “Originally brewed for thirsty British troops stationed on the subcontinent of India, India Pale Ales had to withstand the sea voyage around Africa. Brewers need to take full advantage of two preservatives at the time: hops and alcohol. They increased their hopping rates, doubled  their malt useage to increase alcohol content, and dry-hopped the brew before it set out on its voyage. Our Imperial IPA carries on this tradition- and then some!  The fruity and citrusy hop aroma intermingles perfectly with an assertive malty backbone.  Our brewers added a generous supply of hops to this brew throughout the entire process to provide an enormous hop flavor and balance the elevated alcohol content.”

This choice is the third I have tasted from Otter Creek Brewing, and it is, much like its Stout ‘cousin’, an Imperial and in a pint + 6 ounce bottle. It, too, has a lovely foil cap and looks, just from the bottle, quite delicious. The cap removed gives way to an aroma of powerful hops that go hand in hand with an IPA. The head is slight, but a nice clean white, and while pouring I noticed that this is certainly an unfiltered selection discovered by the ‘silt’ floating freely in the bottle. It’s a stunning copper/amber hue with a very pretty reflection as well. Nice looking brew for sure. Another sniff after the opening swirl gives way to those bitter hops and a bit of a peppery note, too.

The first sip says so very much: Hoppy, crisp, grapefruit rind medley, and a follow-through of deep roasted malts. Outstanding. I have often said that my tastes tend to stray from IPA’s due largely to their prevalent and often overpowering bitter hops. But there is something about this beer that balances that out so very nicely with the citrusy highlights that almost marry their inherent sweetness with the bitterness to blend so perfectly. The longer I drink the more noticeable the grapefruit (I say that because it’s almost exactly what it tastes like) becomes really sort of moving from back-up to main stage, and yet the tangy hops are still there hanging out. This choice might just make me rethink my less-than-enjoyment of IPA’s in general, but if not I will be hunting this brew down again. Delicious beer all around with so many roles being played by so many players. As for pairing it with meals, you could do very nicely serving it with sea food like lobster or a more flavorful fish, or you could certainly enjoy it with ‘pub grub’ and not lose anything in the translation.

Rating: * * * * 1/2
Though an IPA is often just that: an IPA, admittedly this Imperial IPA is a leap above its brethren.