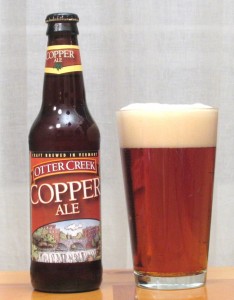 Info: “Our year ’round flagship brew is Copper Ale, a medium bodied, amber ale inspired by the Altbiers of Northern Germany. Brewed with six different malts, three hop varieties and our special house yeast, Copper Ale is characterized by a well-balanced blend of malty notes and mild bitterness.”

This is the second selection I tasted from Otter Creek Brewery. I picked this beer as an ‘opposite-end-of-the-spectrum’ from the Imperial Stout for that very reason: it’s so completely different. The immediate scent is far hoppier than the last, which is to be expected. It’s obvious from the color of the pour where the beer gets its name; it is a lovely copper hue with little to no head, so, as I’ve observed from past Ales of its caliber, quite standard at least in it’s genre so far. However, that being said, it is a very attractive brew indeed. Another sniff gives way to a slight citrus note, mildly peppery, but well balanced.

A taste after a quick swirl to open it up (and I can’t stress this point enough: if you care, give it swirl), it’s on to the first taste. As it seems, the smells were but a coy introduction to what the mouth was craving: slightly hoppy, mild backgrounds of citrus, crisp, refreshing, and just a hint of bitterness to equal out the array of intertwined flavors. The accompanying harmony is a dance of spices, specifically coriander and maybe a shy little bit of clove. It’s beers like this, the antithesis of something like a good stout, that intrigue me; so many mingling flavors and hidden tastes that to ignore them by chugging the sample is to do it a great disservice. It is definitely more than the sum of its parts. This is such a complete ‘firework’ of a beer that it could, realistically, be paired with a wide array of food choices. If I had to choose, I’d say a lite pasta, maybe a Chicken Oscar (that with asparagus and Hollandaise sauce) or even something of the Pork Loin persuasion. So nice.  A very good selection.

Rating: * * * * 1/2
A wonderful child within the myriad ales with such a gorgeous coloring that it stands out as more than just a member of its family.