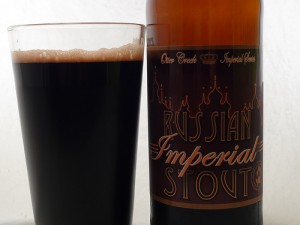 This bottle is a full Pint+ six ounces.

Info: “The style was first brewed in England for the Russian Czar and it is the king of stouts. Plenty of big malt flavors- chocolate and roasted- and high alcohol with lower carbonation and mild hops. We brewed this beer with double the malts and four times the hops of regular stouts!”

From the instant the foiled cap is cracked, you can catch a rich whiff of the amazing aroma emanating from the bottle: chocolaty, malty, and a background nose of fine coffee. The pour is absolutely stunning: the darkest conceivable brown that nicks black completely, but with a nice, soft tan head that hangs on like a good stout should. It’s darkness instantly brings to mind the Lion Stout I tried a while back and if the smell is any indication, I ought to like it just as well.

Being a proclaimed dark beer fan, this is yet another of those fine brews that immediately piques my interest without trying to be something it isn’t; it’s a stout and it screams it aloud. A swirl, a sniff, and a sip and my mouth is inundated with creamy, cloying chocolate flavor that is absolutely amazing. I’ve had stouts -a lot of stout- and often they skimp or try to bury the ‘mocha’ notes behind something else, like fruit, but this sample is stunning in its ferocity. This is not a wimpy beer nor a brew for fans of lighter Lagers, that’s for sure. Another sip and the hops become slightly more apparent behind the malts. They are there -all four-times of them-, but the typical bitterness of a hoppy beer is easily taken down a notch by the delicious chocolate. This is a macho stout for easy sipping and enjoying over time. It would go fantastically with cake, especially of the chocolate variety. However, if it’s a meal you’d like to pair it with, try a bloody meat like a rare Porterhouse or a Fillet au Poivre. Amazing, amazing beer. I’m off to finish this rascal. See ya later…

Rating: * * * * *
A Stout through and through with no aspirations to be anything but. Amazing.