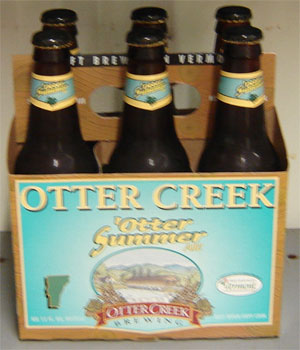 Info: ” ‘Otter Summer is a highly drinkable, light bodied wheat ale.  This is a beer built for Summer: a flavor that is slightly tart, with a citrus-like finish.  Often served with a slice of fresh lemon, ‘Otter Summer is a pleasing and thirst quenching brew“. From the Label: “O.C.B. has been brewing the finest quality, small batch, craft brewed ales at our brewery, since 1991.“

If it’s one thing I’ve noticed abut Summer Ale’s from myriad brewers is that they’re generally really, really pretty. They tend to be clean, crisp, bright, an very pale and smooth. This Otter Creek is no exception there, and that’s fine, assuming -as I’ve yet to taste it- that it’s not a mirror image of so many of the other’s of its ilk. Another thing I’ve just noticed is just how similar it smells like corn! That is a bit bizarre considering it’s beer; certainly not a typical scent you associate with an ale indeed. It’s such a beautiful pour with a slight head and a wisp of foam, but not too much for sure. Even swirling it to open it up only reveals a slight fruity note, but that undeniable corn aroma is still there. Hmm…

After the first sip, here’s what we’ve got going on: slightly, ever so mildly tart. It’s there, but just the same, it’s not. Lemony. There’s where the tartness derives from, but it’s more the lemon flavor as a whole that stands out even beyond its inherent ‘rind’. It’s not bitter even in the most hidden sense; it just is not there at all. A fine departure from an IPA (which I am now a fan thanks to the fine folks here at Otter Creek) with it’s mildness and light, citrusy, crispy mouth-feel. This is one of the very few beers that I would recommend the addition of fruit. I hate to admit that since, in my opinion -typically- fruit needs to stay on a plate or in a fruity drink but not even in the same time zone as a decent beer. I know people in ‘the know’ will try to sell you on the idea of a slice of citrus ‘in’ your beer, but, as a rule, I ignore that mess. In this case, conversely, some lemon or orange adornment, heck, even a slice of melon would be really nice. See, I feel better: in this case, I’d call it the food addition. The more I drink the better I truly enjoy this sample. It really is a nice, simple, ‘lite’ beer for those muggy, sweltering summer evenings hanging out around a fire or over a late barbecue. Though I will tend to lean toward darker, fuller-flavored beers, I will snatch a lighter brew up when the notion strikes, and if this were a choice on my hometown supplier’s shelves, I’d most definitely buy it. Tasty.

Rating: * * * *
Fruity, rich, crisp, and ultimately refreshing. A fine beer for folks more in tune with the ‘liter’ side of beer.