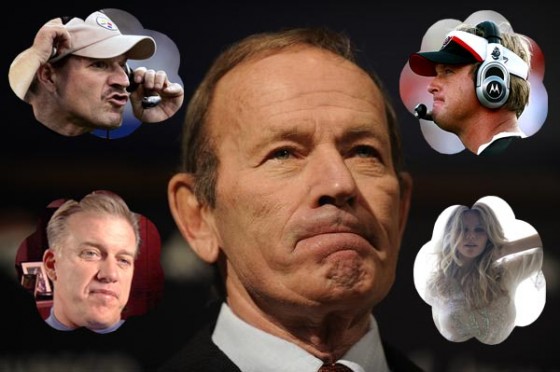 With the 2010 NFL regular season coming to close, we have arrived at a time-honored tradition when the so-called leaders who failed to meet expectation get shit canned. By humble estimation we should be looking at about a dozen teams who will choose to fire their current head coach with hopes and dreams of firing another retread asshole who has already failed in another city. That’s how this works.

However… what if we can influence change?

Living in Denver I’ve had the honor of watching Josh McDaniels, the former Belichick wunderkind turned scapegoat, serve as one of the first kicked off the island… the team has yet to hire a replacement, yet rumors swirl as they are apt to do, suggesting any one of the predictable names you know and loathe may be willing to move to the world’s biggest ski resort to take on this challenge.

I have a wish list of my own, and while owner Pat Bowlen may be thinking about Bill Cowher, Jon Gruden, local icon John Elway, or whatever (men always find time for priorities), the time has come to think outside of the box.

Here are my top ten candidates for the head coaching job with the Denver Broncos. 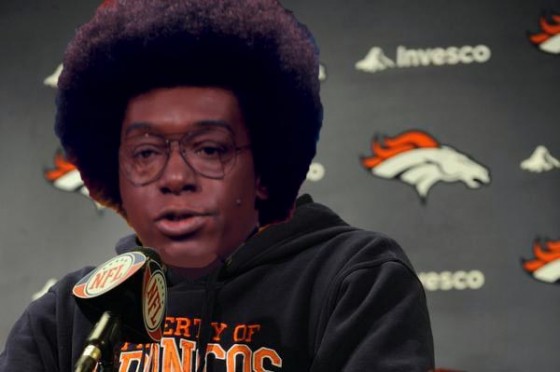 Wishing you love, peace and soul...

The original brother of soul, the leader of cool back when Denver was cool and the Broncos had soul. He’s aged a bit, so maybe it would be wise to team him with… I don’t know… someone that knows what they are doing.

It’s about time the league pushed the afro initiative anyway. There needs to be one pick-worthy afro on every squad. Think of it as a mandatory throwback. This fuckin’ league is BORING. We needs more bang of the buck. Accept it for the party it should be… granted, you can get drunk to the point of conviction at most spots serving the NFL, but that’s not good enough. I don’t need another kegger. I’m a grown-ass man…

I want uncensored Biggie, I want afros, and I want the place to smell like we just rolled out of the Dexter Lake Club.

Call it the Cornelius objective. We can get it started right here in the Rockies (because, you know Denver… known for diversity and tolerance… right). 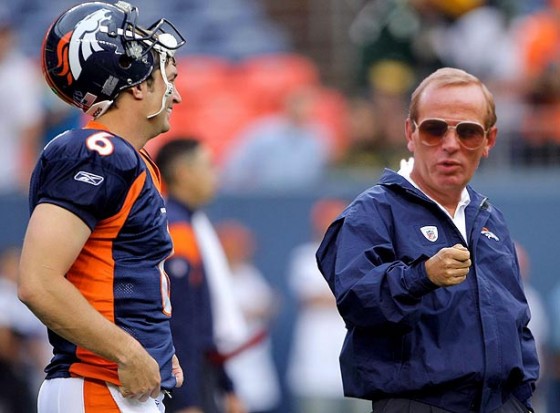 I left my fur coat and cock ring over there...

Like Donny Soul Train, Pat was at his best in the ’70s… nice and tan, richer than God, Burt Reynolds glasses, hangin’ at the swinger’s club with some cognac and herpes to match the fur coat and casual coke habit.

He was also at his best in terms of running the organization. I’m betting Denver would welcome THAT version of Pat Bowlen back.

Here’s the thing… that’s a pic I shopped, putting Bowlen’s head on Mike Shanahan’s body. Funny… the clothes are so fitting, but Pat was the tanning benchmark of the two. You might have a closer fight if you brought Shanny back from Washington today.

That’s what Jay’s laughing at… these old guys in Denver are so fuckin’ tan and they just love them high school girls, man.

Or maybe you want to bring in some new blood, another hip kid… just hipper than Josh. It is Denver, so… 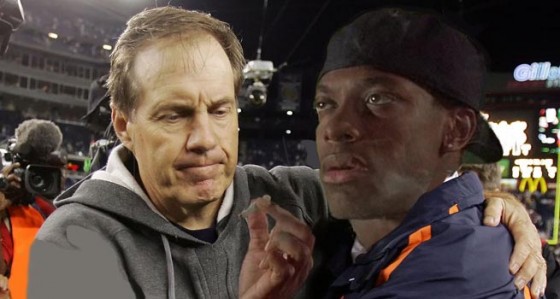 WE JUST GOT KNOCKED THE FUCK OUT!

One of the growing number of states that would welcome Smokey’s lifestyle and, let’s face it, after this season the team could stand to get their minds right.

After all, they ain’t got no job.

Sure looks like Bill is eyein’ that hog leg up, huh? He’s a cheater… cheated on his wife, cheated at his job… so why not? If you are going to brag about hangin’ out with Bon Jovi you might as well get high.

Let’s keep it young with some ol’ school flavor. The kids today aren’t so motivated with all that legal grass. We need someone who can connect with the kids while maintaining the sensibility of the older generation. 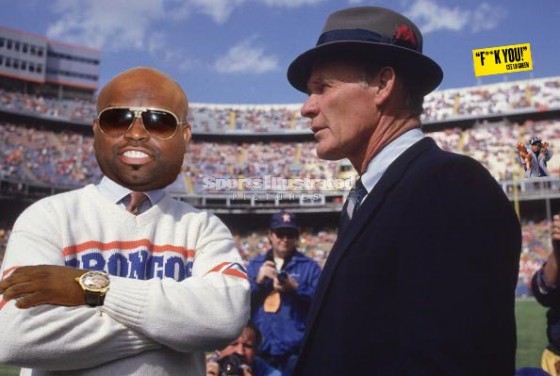 Now ain't THAT some shit, Tom?

Give him this… at least with Cee-Lo, you know where you stand.

I love this guy. I’m going to find a way to get him into at least 20 posts this year. I might to an entire Photoshop cavalcade of Cee-Lo traveling the world. The way he sings, I can imagine his ass talking to Tom Landry… that’s a lie. No I can’t. Its going to be black or white with Landry. Either he’s a closet crazy-ass Texan like Bush-Dub or he’s a piece of drywall.

Whatever… I refuse to believe Cee-Lo couldn’t have gotten four wins. Thus, after this season, he’s on the list.

Of course, we could swing it towards a sports guy or two… would probably make sense. When I was growing up there was always one guy that got me pumped up for action… this one guy I would watch on Sunday mornings would get me all wound up and violent. 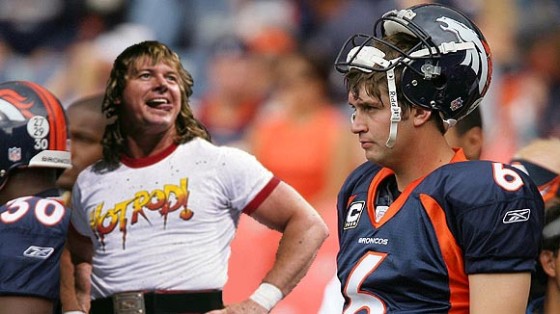 Welcome to the Pit, Jay! Grab a chair...

Give it a second and think… how fuckin’ great would it be to have Piper’s Pit after every game? You have the games on Sunday (this team doesn’t deserve to play on Monday) and then you bring ’em back on the air on Wednesday night for the Pit, taking whichever player sucked ass and putting him to task. Its Raw/SmackDown all over again, but better. It has football AND it has Rowdy Roddy Piper.

Roddy never lost a dozen of anything. So go ahead and crown they ass.

I can’t believe we’ve gotten this deep into the list with out the king of execution. People around the world know there is only one man with unquestioned ability to deliver. 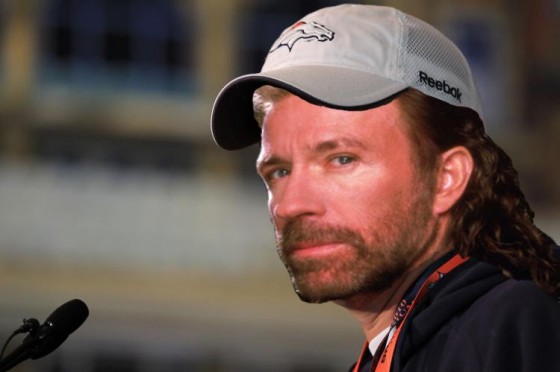 There is no chin behind his beard. Only another fist.

We’re so desperate we’ re going to let Chuck rock the Walker Texas Ranger mullet, no matter how fitting it seems for the black-hole cowtown that is Denver. We’ll take the hit to get the Broncos on track, and when Chuck Norris is in charge you better believe your ass is on track. Your ass is the track and Chuck Norris is gonna run his fuckin’ fist right through it if you don’t get your shit together and start winning some football games.

Besides… this teams needs an on-duty cop, the way these mother fuckers fill the police blotter. Perrish Cox and Elvis Dumervil the latest in a long line of parolees that seem to flourish in Denver. Why not save a few bucks, kill two birds with one stone?

With Chuck Norris you’ll kill all the birds with one stone.

And if you are going with the motivation of murder, why not swing for the fences? 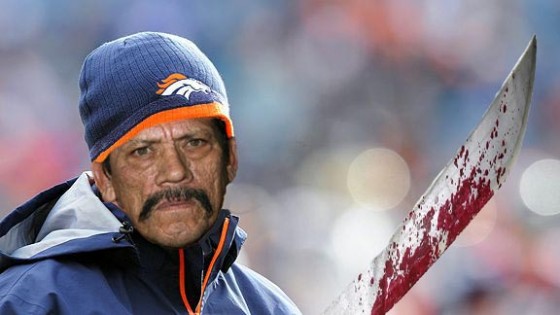 I'm not looking for "safe".

Also known as Danny Trejo, also known as the baddest fuckin’ Mexican that ever lived to become rich and famous.

Seriously. If you don’t know, go watch Champion on your Wii…

… or watch for the upcoming interview with the boys on the podcast. His story is insanely powerful and will scare the livin’ shit out of any of the panty-waste rich-&-privileged set working at Dove Valley. This guy was smokin’ weed at eight, doin’ smack at 12, doin’ Rikers, doin’ gangs, doin’ killings… then doin’ Runaway Train, doin’ Desperado, doin’ Tarantino, doin’ X-Files, doin’ Spy Kids, doin’ Stargate:Atlantis, doin’ Machete, doin’ Modern Family… doing fame and fortune from incarceration and ruin.

If anyone can motivate, it’s Danny Trejo… it’s his life’s work, and for good reason. I’d be scared shitless to piss him off, too.

Of course, its a kid’s game. This is a young team. Roster is loaded with youth. Maybe you needs someone along those same lines but with a little more heart… a little compassion… a little less blood and a lil’ more hug. So maybe you go with… 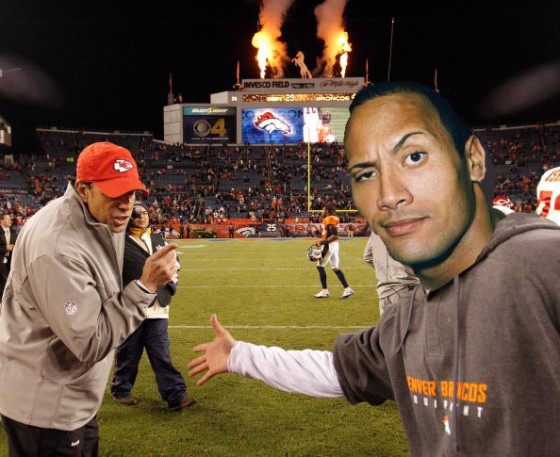 Can you smell the bullshit this guy is cookin'?

He’s got football experience, he’s a box-office superstar, my kids fucking WORSHIP him and I know they aren’t alone, and let’s face it… the guy is fun to watch!

DJ’s joined a list of one ranking the most tolerable Disney celebrities alive (I’m not counting Vanessa, boys… but if you want to make it two, I’m down with that). Dwayne also happens to be one of the only proven football commodities we’ve considered (his stint as The U… if you haven’t heard by now you don’t know because he brings it up EVERY fuckin’ time he does an interview or a sit-down with anyone that might be connected to sports at all… just go find a clip of him talking on YouTube if you have to know). He’s a former wrestler, he’s played a gay cowboy and made it funny, he’s played a hockey-playin’ tooth fairy and made it… well… he made it, he’s done action hero, he’s done sports hero, he’s done children’s hero, he’s done football, and he seems to be grounded enough to make it all work.

The Broncos could use some of that. They can’t make shit work. 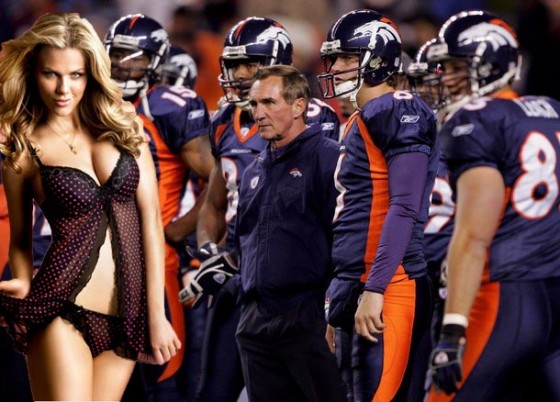 If you're going to be distracted, do it right.

I just wanted an excuse to post another image of Brooklyn (she was in the opener as well… she’s the Mariano Rivera of my posts… you know its there when you need it, so don’t be shy about making the call)… it’s a habit I tend to ignore, but I don’t see any need to be stingy. You’ve probably stopped giving a shit at this point anyway. The Broncos are going to fuck this up like they’ve been fucking everything up since the day John retired. Maybe they’ll get it right but if they do we won’t know it any time soon, so screw it.

The season is over, so why the fuck the not? In fact…

… I am what I am and I make no apologies. Put her on the sideline and suddenly I’ll find faith, Denver. And I won’t be alone.

Of course, there is one other path to consider that might help us all regain faith, and it starts by bandwagoning the faith held and preached by the new face of this franchise. Pretend its Christmas again, or Easter… one of the two times you’ll go to church this year (which is two times more than I)… put on your Sunday best and grab a few dollars for the plate. It’s time to beg, Denver.

And you’ll do so by hiring the best available. 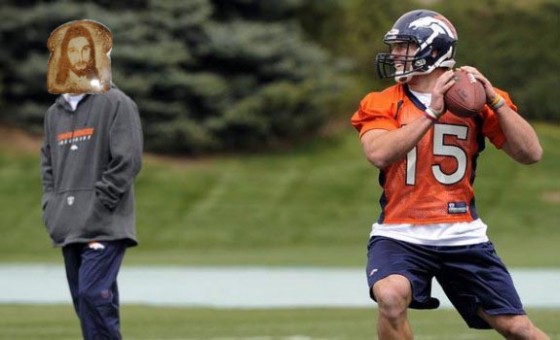 He has risen... with butter and coffee.

There are two undeniable signs, symbols of reverence and holy devotion, on the planet today suggesting the Almighty is real and is worthy of your worship and service.

The first is Tim Tebow.

The second is Jesus Toast.

Isn’t it time they joined forces?

Just think… the Wonder Twin Powers of God fighting the advances of evil and the AFC West to insure peace, tranquility, and celibacy for the greater Denver area so fans of football and balanced breakfast can rejoice in the bounty provided by the ultimate heavenly duo.

Stick Jesus Toast on the headset, put Tebow behind center, and we will be witness to miracle… and a nutritious start to each day.