Humor > Our Yard, Our Rules

Our Yard, Our Rules

Ours is an entertainment site (we don’t use the word Blog), and while occasionally we publish something that is halfway intelligent, its not exactly what we’re known for. So don’t expect a bunch of well researched and reasoned thoughts to emanate from this article, I’m just gonna spew.

The L.A. Times published a piece entitled ‘How would we have reacted if TMZ had been wrong about Michael Jackson’s death?’ by Alexandra Le Tellier on its ‘Comments Blog’ yesterday. The main problem with the piece is that TMZ wasn’t wrong, the rest of the media was. Let’s look at some quotes :

TMZ would become the first outlet to announce the singer’s death. What came next was a surprise. Before the RIPs and the “he touched us all” jokes, many users began posting jabs aimed at CNN — more specifically, its irrelevance as a news source. One person joked that TMZ ought to write an obituary about CNN’s death. Another user suggested that CNN spend more time reporting and less time advertising its Twitter page. But what if TMZ had been wrong?

Let me admit it right here. I was among those making comments about CNN’s inability to report this story:

@Gunaxin: It’s on #twitter, CNN will be reporting it shortly. Twitter is their source for news RT @fangsbites: CNN not reporting this yet. 5:48 PM Jun 25th from TweetDeck

In the grand scheme of things, it looks like CNN was about 45 minutes late in reporting Jackson’s death, which isn’t bad right? However in the world we live in now, that was an eternity. TMZ had the story, and that story was spreading across the internet like a wildfire, and they were right.

My comments were really directed at the fact that CNN failed to acknowledge that there was a report that stated Jackson had passed. Jackson had been dead for hours (official time of death is irrelevant, he was dead much earlier) when CNN reported that they were able to confirm that “Jackson is in a coma”. They stated as fact from confirmed reports that a dead man was in a coma at the time of reporting. They were wrong, not TMZ. Even if Jackson had been in a coma before his death, why not report : “We have confirmed reports that Jackson fell into a coma, however TMZ is reporting that the King of Pop has died. We are working to confirm these latest reports, and we will get back to you on that.” 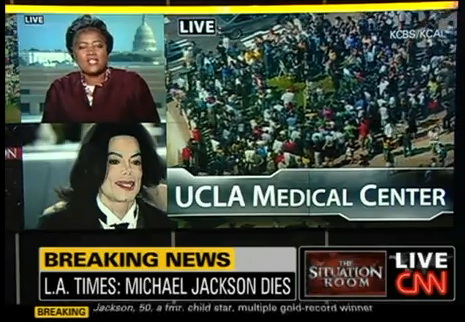 Is it that CNN doesn’t consider TMZ or Twitter to be a credible source? If that were the case, then I could see why they reported the story in this manner. They waited for members of the mainstream media to break the story, before running with it, and then credited those outlets with the news, instead of TMZ. So we’ll just assume that CNN doesn’t think that TMZ, Twitter, and Blogs in general are credible sources of information, and thus should be ignored when reporting the news. (for the purposes of this article, I lump TMZ in with other new media, even though it is different)

That is of course unless they are reporting on Iran right? Following the election in Iran, CNN and other news outlets failed to report what was happening, because they didn’t know. Later after receiving heat on the subject, they began reporting, using Twitter as a source of information:

So which is it CNN? Are you a credible news source that verifies your stories before reporting, or are you going to engage in gossip with the rest of the internet? Now I may be picking on CNN here, but that’s only because that is where I go for News. I use DirecTV, its channel 202, just a few below ESPN, easy. I have no idea where the hell those other channels are, and there is zippy chance I am going to watch something called MSNBC. So CNN is what I watch when I want news. It is not where I go for celebrity gossip, or to hear people’s opinions from Facebook and Twitter.

The real problem here is that the traditional media outlets are trying to embrace new media forms in order to stay relevant, but they can’t have it both ways. There is a conflict when you say that Twitter or Blogs are not credible, and then turn around and tell people to add you on Myspace or become a Facebook friend. That line between news and opinion or credible report and wild rumor is constantly getting blurred.

Has technology’s ability to deliver information at such a rapid pace corrupted us? It’s one thing to marvel at how social media sites have helped spread Iranian news we might not have attained due to censorship — and with such timeliness; it’s quite another to have become a culture that prizes speed over confirmed facts. Have our standards for accountability dissolved?

If you want to come play in our world, then you play by our rules. Getting it right first is the game, and TMZ won. CNN got their ass handed to them by TMZ, and the internet knows it, so you may as well admit it. On Friday, I sent this Tweet:

So I don’t get it. CNN and others can take from the social networks, leveraging it for traffic, pulling comments and information from it when they find it convenient? Yet, when they are scooped, they can’t acknowledge that blogs or social networks have more up to date information then they do?

Allow me to paint with a broad brush when I say that the traditional media doesn’t understand the new media paradigm. Entertainment and news on the internet is not a competition. If it is to you, then you are a greedy son of a bitch. There are enough stories, and enough page views to go around. So every once in awhile, admit that someone else has something better than you, throw out a name, toss out a link, and give them some of your precious traffic. Because you know what? Next time you have something good, maybe we’ll link to you. Bloggers and Social Networks give out links and traffic like candy, and it seems to be a one way street when it comes to traditional media. Get over yourselves, and give the credit where it’s due. In the end, the best will win, and the people will know who played the game fairly.

Those are our rules, and if you want to play in our arena, then we expect you to follow them, or else we will mock you. You want us to check sources and report credibly if we are breaking news? Well, we want you to acknowledge us when we school your ass to the hoop. Maybe we can come to some sort of deal?

** I apologize to our normal audience, as this article has a ratio of text to media that is quite disturbing.

For similar goodness, see the Hugging Harold Reynolds take down of Jay Mariotti or Buzz Bissinger.