Nicklas Backstrom scored the game winning goal 31 seconds into overtime, his third of the game completing the hat-trick and a 4-point night. Alex Ovechkin scored a goal and had 3 assists, and the Washington Capitals defeated the Montreal Canadiens in game 2 of their playoff series. So what do two of the best players in the league do after a thrilling come from behind victory? How about shoot hoops on the Washington Wizards practice court?

While Coach Bruce Boudreau was giving his press conference at the podium (which was setup in the Wizards practice court) he was interrupted by the sound of a bouncing basketball coming from behind the drapes. The interruption caused him to quip, “Are the Wizards still playing?” Once he was informed it was his young star players, he continued with his presser and didn’t think much of it. We were able to catch video of the shoot-around, and I think you’ll agree these two should stick to hockey : 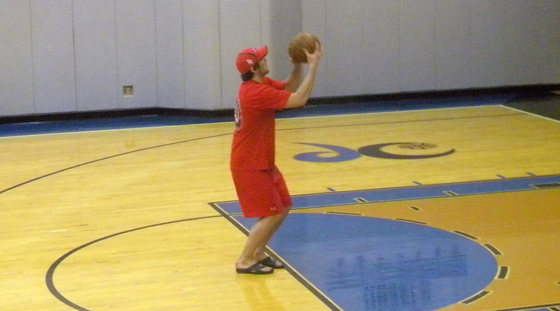