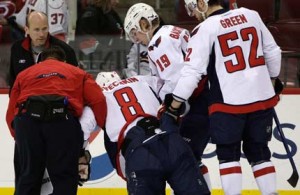 Alex Ovechkin, the best hockey player in the world, left the game this evening with a knee injury. The injury appears to be serious, as Alex was not able to put any weight on the injured right knee when skating off the ice. The injury occurred during the first period, in a knee on knee collision with Carolina’s Tim Gleason. Ovechkin was penalized for the play, receiving a five-minute major penalty and a game misconduct.

This is the second time that Ovechkin has been injured this season, and also his second game misconduct in the past 3 games. He missed 6 games to begin November, with an undisclosed upper body injury, and he was sent to the locker room early against Buffalo for a high hit the day before Thanksgiving. The Capitals are not commenting on Ovechkin’s status this evening, but should have a vague report tomorrow.