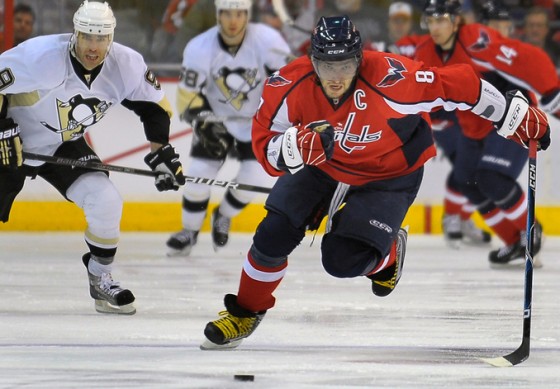 Alex Ovechkin just got finished leading the Washington Capitals to the best record in the NHL and the best record record in team history. But this season has been a bit different for the league’s two-time reigning MVP. He’s been suspended, twice. He’s suffered injuries. He got more assists than goals. But one thing remains the same – he’s making headlines. Gunaxin and CapitalsOutsider.com look at his most memorable moments of the 2009-2010 regular season.

And so it begins… Ovechkin starts what’s to be known as his ‘reckless’ season (remember how last year was known as his ‘too much celebrating’ season?). He gets fined $2,500 for this incident against Atlanta’s Rich Peverley.

Ovechkin, who has been virtually indestructible during his first four seasons in the league, gets into a skirmish with future teammate Jason Chimera of the Columbus Blue Jackets and injures his shoulder. He misses the next six games.

Ovechkin boards Buffalo’s Patrick Kaleta and gets ejected for the second time in his career.

A double whammy. Ovechkin not only gets suspended for his knee-to-knee hit on Carolina’s Tim Gleason, but gets the worst of it. The NHL suspends Ovechkin for two games.

Captain Chris Clark gets traded, and a few games later, Ovechkin emerges from the dressing room wearing the ‘C’ on his jersey. The Capitals go 17-1 after that.

Ovie drops the gloves and even removes his helmet, preparing to fight Tampa Bay’s tough guy. But Matt Bradley jumps in and steals the fight. While this moment is more about Bradley than Ovechkin, the new captain shows that he isn’t beneath doing dirty work in a 7-3 loss.

This is the fourth time Ovechkin has five points in a game, but the first time he has four assists. Nicklas Backstrom, who had done it a few times himself, welcomes Ovie to the club.

Note to players: When you score your 500th career point, make it memorable. Ovechkin does it with one hand on the stick.

Who’s your daddy, Mike Milbury? Sidney Crosby scores two first-period goals in this Super Bowl Sunday nationally-televised game on NBC, but Ovie tops him with three (and an assist on the winner), propelling the Capitals to a 5-4, come-from-behind victory.

In another nationally-televised game, Ovechkin checks Chicago’s Brian Campbell in the first period and is once again ejected, and once again suspended for two games.

This happened during the Olympic break in Feb. when Russia was playing the Czech Republic. Capitals fans collectively cheered when Ovechkin demolished former Cap bust Jaromir Jagr in Vancouver.