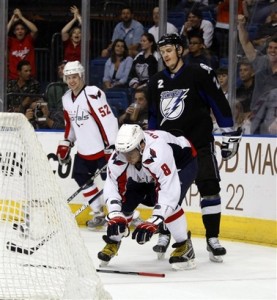 Alex Ovechkin scored his 50th goal (of the season, not in one night, that would be some kind of record) on Thursday evening and celebrated by dropping his “too hot to handle” stick to the ice. Ovechkin is the best player, and biggest star in the league. Despite what many may say about this celebration, it was a one time thing that he did for his 50th goal, and to spite Don Cherry. He doesn’t make a regular habit of scripting celebrations, and for anyone in the NHL to criticize him is just a little bit silly. Ovechkin makes hockey relevant again, and his personality and star quality is what you need more of in the league, not less. Head over to Capitals Outsider to see two videos of Alex Ovechkin : En Fuego.