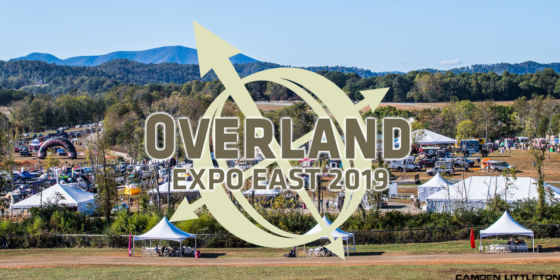 Overland Expo is the premier overland & adventure travel event in the world, and we recently attended the latest edition of Overland Expo East at Infinity Downs, in Arrington Virginia. It was our first time at the massive event, but it was also apparently the largest they’ve ever had on the east coast, with more attendees (12,500) and exhibitors (188) than ever before. Event organizers moved the Overland Expo East event to Infinity Downs in 2019, a facility well-known as the home of the Lock’n Music Festival and other large-scale events. The new venue was fabulous and we were delighted to be among the 55 media outlets on-site covering the event, thanks to Trail Trek Tour. 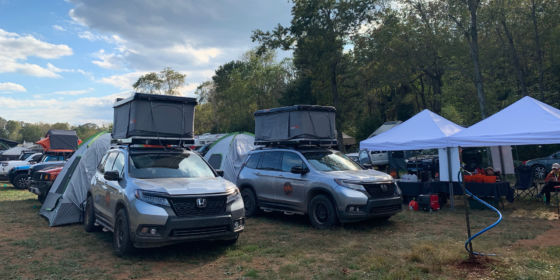 Our Trail Trek Tour campsite at Overland Expo East featured a pair of rugged 2019 Honda Passports, up-fitted for Overlanding by JSport and Roofnest. We actually made the overland trek to Arrington, Virginia with the Passports, including a trail ride which we’ll cover in more detail for a future post. When we arrived at Overland Expo on Friday night, we were escorted to an excellent camping area just below the exhibitor area, where our large group of 6 media and 3 guests was able to spread out as needed and made ourselves comfortable. We were warmly greeted by overlanders from near and far that were camped adjacent to us, and welcomed them into our campsite for some tortilla soup and tacos before heading to sleep for the evening. 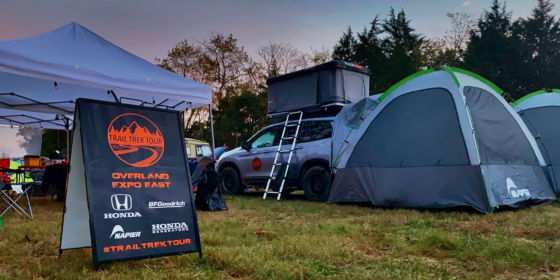 While we had a variety of tents in our campsite, our home for the two nights was a Backroadz SUV Tent from Napier Outdoors. Rooftop tents are known for their easy setup, and have become the symbol of the overland lifestyle, but we found the Backroadz SUV tent to be more practical for several reasons. While it did take longer to setup, the payoff was tremendous in terms of additional space, and the ability to stand up inside the tent. We absolutely loved the ability to connect the tent to the tailgate of the Honda Passport, in order to be able to access additional gear (or sleeping area) without leaving the tent. That is something we appreciated even more when the temperatures dipped below 50 degrees, and the rain started falling on our second night. At a fraction of the cost of the Roofnest, we think an SUV tent from Napier is definitely an option worth considering for your overlanding needs. 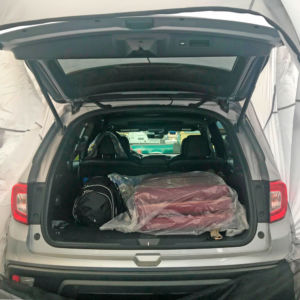 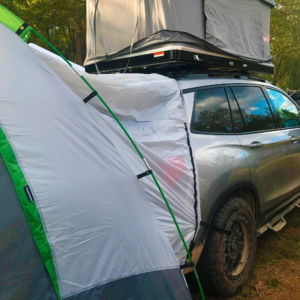 When dawn broke, and it was time to put on the morning coffee, a Honda Generator powered a Keurig Coffee Maker in the Trail Trek Tour site. Who ever said that overlanding needed to mean “roughing it?” With the Honda Generator, we were able to charge our phones and laptops, power lights for the dining tent, heat up a crockpot for tortilla soup, and create on-demand hot coffee or tea by the cup. We were able to do all of that without waking up our neighbors, as the Honda Generator is whisper quiet, especially with the eco-throttle, which matches the throttle (thus lessening gas consumption and noise) to the load placed on the generator. 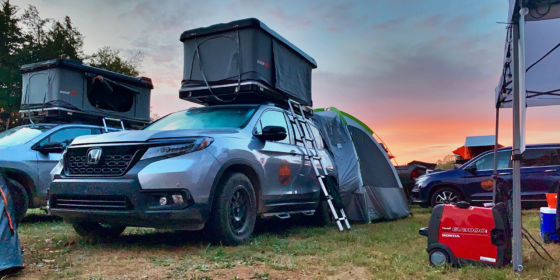 We learned more about Honda Generators from Honda Power Equipment when we visited the Honda exhibitor site. The model they loaned us to use in our site was the EU3000i Handi, the lightest and most portable 3000-watt generator in Honda’s lineup. It has a flip-up handle and sturdy transport wheels, and we were able to wheel it around as easily as a rolling cooler, something you certainly can’t do with most 3000-watt generators. The most popular of their generator lineup however is the EU2200i, which provides 2,200 watts of quiet, lightweight, fuel-efficient power. Both feature Honda’s advanced inverter technology, which provides safe power for high-tech devices. We saw them all over the place at Overland Expo, and they are clearly the generator of choice for the overlanding community. 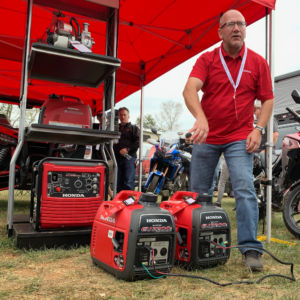 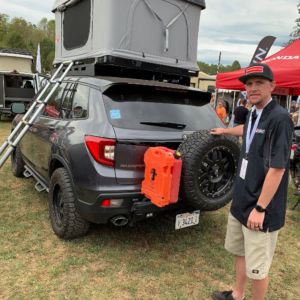 In the Honda booth, we also met a representative from JSport, who told us all about Jsport Performance Accessories, which they make exclusive for Honda vehicles. While our Honda Passports were up-fitted with new wheels, AT tires, rooftop tent, skid plate, and step rails, the fully-loaded Honda Passport Adventure Lifestyle Project was on display in their booth, and it featured some additional goodies. In the photo above you can see the Jsport Plateau modular roof rack, and Jsport external swinging spare tire holder with jerry can storage. It also features a revised front bumper with lighting from Baja designs, and a Jsport lift kit.

With 188 exhibitors on-site, there was plenty to see at Overland Expo East, and our next stop was to visit our friends at BFGoodrich Tires. There our media group engaged in some great off-road / overland conversation with the experts in off-road tires. We discussed the technology that went into their All-Terrain KO2 tires, which really are the perfect tire for the overlanding lifestyle. Later that evening, our group rode on both KO2 and Mud-Terrain KM3 tires to grab some dinner with BFGoodrich off-site at Devil’s Backbone Basecamp. 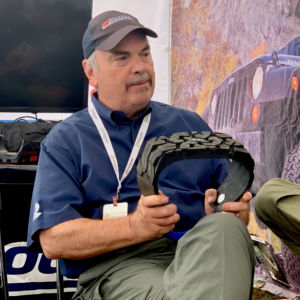 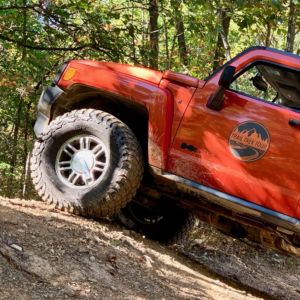 There was so much to see at Overland Expo East, that you can’t possibly do it all. We hope to make it back again next year to experience even more of this awesome event. We didn’t even mention the 200+ classes, seminars, demos, activities, slideshows, and films; totaling 440+ session-hours of instruction by 125 presenters, instructors and VIP attendees. To get a fuller picture of everything that Overland Expo has to offer, check out their official recap videos below: