The quest for further innovating pizza continues, with the latest entry from Pizza Hut that they are calling Overstuffed Pizza:

Created by stuffing pizza sauce, toppings and extra cheese seasoned with a special Italian blend of spices between two slices of our signature golden crust this pie is sure to be a crowd pleaser. The Overstuffed Pizza is available in two varieties: Italian Meat Trio (Pepperoni, Pork, and Italian Sausage) or Supremo (Italian Sausage, onion, green pepper and mushroom) and is available nationwide at Pizza Hut locations for only $12.99.

They recently reached out to us to try their latest creation, and honestly who would turn down a free pizza being delivered during an afternoon of NFL football? So below is what our pizza looked like, and our observations as highly trained pizza connoisseurs. 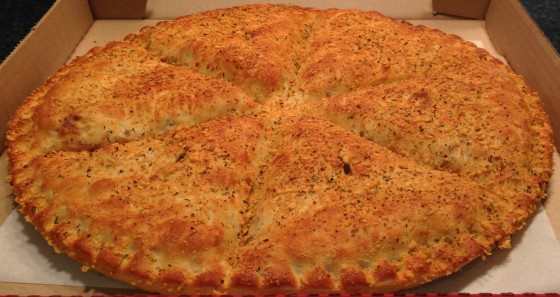 Our first impressions upon opening the box were that the Overstuffed Pizza looked manufactured, and similar to a P’Zone (although better). The fact that it’s only available in two variations, leads us to conclude that this is a ready-made product that is shipped to our local Pizza Hut (possibly frozen) and then cooked in their pizza oven. That would account for why you are unable to customize your fillings. None of us have ever had a P’Zone before, but we assume this is similar to how that product is created, and that this tastes similar. We suppose the fact that all of us normally just order Pizza from Pizza Hut (and not P’Zones) is why this full-sized offering was added to the menu.

As you can see, we ordered the Italian Meat Trio, because we’re men, and men like dead pigs on their pizza. We quickly figured out that this was mostly a knife and fork type of pie. While our slices were sealed around the edges by the two layers of crust, little balls of sausage attempted to escape once you bit a hole into the crust. The photo above was a clean cut down the center, to give you a cross-section look.

As for the taste, if you like Pizza Hut Pizza, you’ll probably like this. If you are some pizza snob who turns your nose up at certain chains or variations of pizza, then don’t even bother, this probably wasn’t made for you anyways. We found that it was definitely filling, when you consider the doubled crust. Re-heating a slice in the microwave the next day produced a predictably chewy crust (it didn’t reheat in the microwave as well as most pizza) so we’d recommend trying a toaster oven which we didn’t have on hand.

At a cost of $12.99, it’s a decent value considering the size and the amount of yummy goodness contained within. Hopefully they’ll figure out a way to make these custom (and fresh) in the restaurant, with the fillings of your choice, otherwise I see this being somewhat of an afterthought on the menu for most people. However, if they sent us one every weekend, we wouldn’t complain.