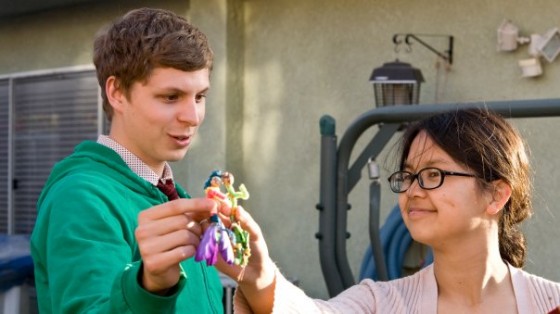 Is it a documentary, is it a drama, is it a comedy?  What’s most important is whether or not it’s a chick flick you won’t want to gouge your eyes out while being forced to watch. Paper Heart is all right, but chances are you’ll either relate to, or hate the identical meek and quirky personalities of stars Charlyne Yi and Michael Cera and their junior-high style courtship.  Cera you know as the same character (seemingly himself) in Superbad, Year One, Arrested Development and the like, Yi you may remember as the stoner girlfriend in Knocked Up. 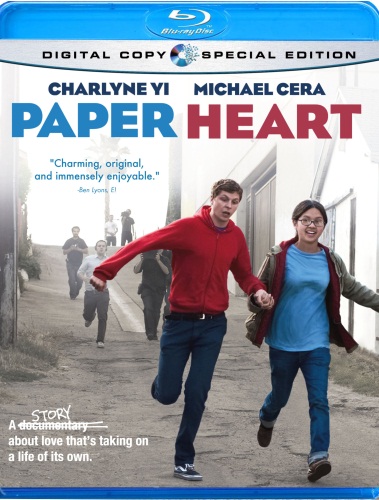 The film tightly weaves a documentary about Yi on a cross-country quest to find out if love actually exists with a story about her and Cera starting a relationship.  The mystery of it all is whether or not their romance is fact or fiction.  Yi has gone on record claiming and denying both, but since the on-screen ‘director and friend’ Nick, played by Jake Johnson, is credited with playing a role (the real director), it’s got to be a sham.  Regardless, it is fun trying to decide for yourself if you aren’t able to just sit back and buy it.

The people interviewed about their relationships are really the most engaging characters in Paper Heart.  Yi interviews a wide range of people from an Elvis Wedding Chapel proprietor in Vegas, to a gay couple in New York, to an older Southern couple whose relationship kicked off with a man driving his truck up some courthouse steps to keep his woman’s new shoes dry.  Their stories are re-enacted by gut-wrenchingly cute homemade puppets and paper dolls, a welcome little visual twist.  Yi also interviews some of her famous friends like Seth Rogen and comedian Demetri Martin, who add a few laughs along the way.

The girls will dig this movie and what it explores, while the guys will enjoy the awkward moments, soul crushing comments and cat and mouse game of picking out what details blow the cover of reality in the actors’ relationship.  But what if Yi is actually pulling our strings and her relationship is the real one and the ‘real people’ are the actors telling made up stories?  That’d be pure genius, but we’ll probably never find out the truth, so take it for what it is- an indie love chick flick wrapped in a documentary that’s still pretty entertaining and more than watchable.

Paper Heart is available now on Blu-Ray and DVD.