Humor > Pop Culture > The Lair of the Parking Lot Seagull

The Lair of the Parking Lot Seagull

Anyone seen the Sea?

Imagine -if you can- a city in an area more than forty-five minutes from any sizable body of water. Tough, right? I kid, of course. Cities like mine are all over the place. However, the city of which I speak is Kalamazoo and it’s in Michigan; a well known peninsula in the contiguous United States. Sure, it’s definitely surrounded on three sides by the greatest lakes in the Nation named, coincidentally, the Great Lakes, but the real issue arrives when one of the said lake’s denizens has migrated to way, way inland. I speak, of course, of the damn Seagull. More specifically: The Damn Parking Lot Seagull. 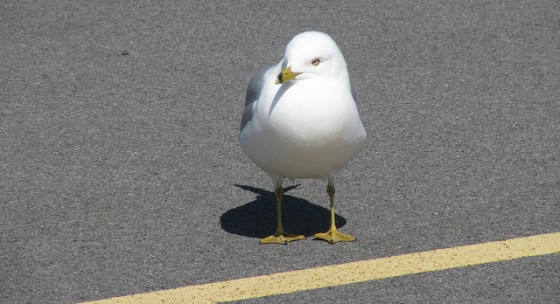 Look at that smug bastard.

Picture a curious drifter with a look of stupid wonderment on his face patrolling a parking lot begging, mutely (well, mostly- gulls after all have that infuriating ‘call’) for handouts and then fleeing in terror when you whip a tater tot at his head. Only then can you understand the level of annoyance we’re dealing with here. They mosey around the blacktop like they’ve been brainwashed, hardly taking wing unless they either feel threatened or, as I said before, something greasy and potatoey is chucked at their filthy little skulls. Ah, but they are just birds; winged and feathered nature. Lost winged and feathered nature, but there you have it.

Why not ask, “Why are they there? In those parking lots scrounging what little bits of flotsam and jetsam collect between the cracks?” Okay, Mr. Poet, let’s ask why. So I looked it up on the inter-webs because where the hell else am I gonna find answers to questions this mundane and ridiculous… right? Well, here’s what Wiki Answers has to say (verbatim, I might add).

Seagulls love our leftovers and where ever there are people there are leftovers. Additional, seagulls are good flyers. They look for every opportunity to rest so that they can fly with less effort. The parking lots are usually black. Black is an excellent absorber of heat (from the sun). This warmth cause the air near it to heat and rise. It is this rising air that permit sea gulls and other soaring birds to fly with less effort by catching a ride.

Alright, I guess I can buy part of that. That part being the loving leftovers part. That makes as much sense as anything, I suppose. But what’s this nonsense about parking lots being used as giant convection plates? Are there really that many big parking lots between sizable bodies of water that these denizens of dumpster diving (with or without a dumpster) can cruise effortlessly over the land? I guess. It does seem that the advance of humanity across the landscape has given rise to acres of tarmac. So maybe that answers the how question more so than the why.

Just recharging the batteries with some thermal energy, don’t mind us.

So why not flocks of other birds from the area? Yeah, sure I’ve seen mini masses of starlings or grackles or some other stupid-sounding bird picking up little bits and then disappearing in a dark cloud of feathers and poop. But none hang out as purposefully as seagulls. It’s like they have an agenda; some kind of secret plot devised between the gulls themselves to spend their days looking just innocently and goofy enough to draw on humanity’s heart strings in hopes that we’ll toss them a French Fry or a crumb of doughnut. They are, effectively, the orphan puppies of the skies. All annoyances aside, their only job just seems to be keeping those yards of blacktop clean of our leavings. Salute-worthy? Perhaps. But ultimately I thinks it’s just as fun to pelt them with tater tots.