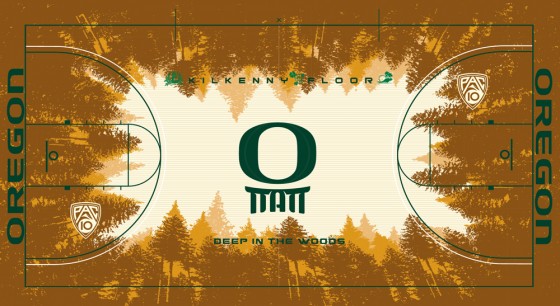 What the hell am I looking at?

This time it has nothing to do with football and isn’t about Boise State. Looking for their own talking point, the University of Oregon has unveiled their own unique playing surface featuring the image of trees lining the perimeter of the university’s basketball court.

Costing $237 million (obviously well worth it), the court provides a new talking point for the university following their loss to Auburn in the football BCS National Championship.

The university’s close relationship with Nike’s co-founder has caused them to be the talk of college football due to their hundreds of uniform combinations, and not surprisingly, Nike has a hand in this visual basketball gimmick as well, in charge of the design and funding of this project.

As if the vertigo-inducing image on the court wasn’t enough, apparently there was a need for a fear-inducing slogan…

“Deep in the Woods”

Sort of conflicts with the warm and fuzzy image of the university’s mascot, the Duck, doesn’t it?

Complaints about the new court have already come pouring in, ranging from it being disorienting to being straight nauseating. For my money, more often than not it appears as if someone spilled a ton of brown liquid on the court and the players are playing through it.

Decide for yourself – is this new trend of crazy playing fields and surfaces awesome, or a gimmick and waste of money?