Sports > Other > Patrick vs. The Herd

Patrick vs. The Herd 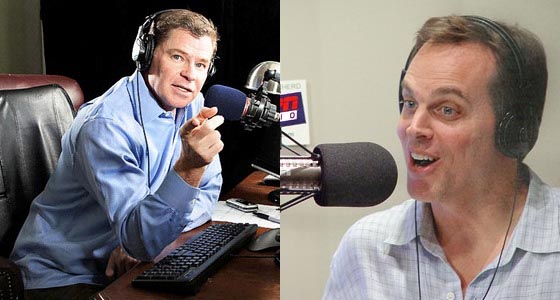 As we come off Super Bowl XLV we are reminded of the joys of sports media drama… granted, no one loves talking media more than media (thank you, Dan LeBatard), but for loyal fans of sports, the ears have become as popular in digestion as the eyes, nose, and throat.

And when you talk about food for hearing from the world of sports, you’re talking about sports radio… and there is no drama that matches the growing feud between Dan Patrick and Colin Cowherd.

Both take on the similar spots on the daily schedule for the east coast (where sports radio is said to enjoy it’s most passionate following… hard to argue since all of the best shows hail from there), they have crossed paths in the past on multiple occasions (several of them producing alleged fireworks), and a quick search of the blogosphere proves there are definitive camps supporting both.

Patrick is the former face of the Worldwide franchise, a member of the Dynamic Duo that built the SportsCenter franchise in helping ESPN become the preeminent media power it is today. He eventually wore of the corporate life and found his love for radio, discovered while at the Worldwide Leader, was his path to freedom. He took his show home (literally, producing the original incarnation of the show sans ESPN out of his attic) and has become the face of a new franchise, serving as the flagship show for DirecTV and their fledgling television offering, the 101 (found on channel 101, go figure), all in conjunction with Sports Illustrated where Patrick offers occasional print contributions, often produced directly from interviews done on the radio show. His waves were recently picked up for syndication on Fox Sports Net, bringing it to millions of homes across the globe.

Cowherd is the man who replaced Patrick on the ESPN airwaves after serving the west-coast audience for several years out of several markets (including Las Vegas and Portland). He turned that into an opportunity, originally invited by ESPN to replace Tony Kornheiser. When Patrick’s negotiations to prolong his deal with ESPN broke down and Dan decided to go at it from another direction, Cowherd became (along with Mike and Mike in the Morning) the flagship show for the Worldwide airwaves and he has been raising hell since. He’s become a persistent source of debate and complaint since, and while he draws good numbers and is the source of a never-ending stream of sports interview and discussion, there are more than a few in the industry who openly question his value and talent.

Cowherd has, for most of his career, turned his show into a personal stage. He rarely engages any other personalities, he dedicates more time to his own voice, and he tends to put less focus on interviews and time spent with names from around the sports universe. Not that interviews aren’t there… Cowherd pulls some of the most illustrious celebrities to be found from the sporting world… but vast portions of his show are filled with his voice and his voice alone. He tends to lean towards more controversial topics and will, on occasion, take to off-beat angles to produce controversy when it’s not readily available from the headlines. It would seem, based on the readings of this biased observer (I listen to DP every day… but I’d list LeBatard as my personal show of choice), the bulk of the blogosphere leans towards an emotion of hatred towards The Herd (see the links below). With that said, he draws an audience, the folks at the Worldwide Leader continue to increase his presence, and Mark Wahlberg helped him get a sitcom based on his life. You can shake a stick at it if you like… he’s paid enough not to give a shit.

Patrick brings an entire crew of on-air talent into the discussion for his daily dives into the sports section off the wire. He has a cast of four across the glass – Paul Pabst, Patrick “Seton” O’Connor, Todd Fritz, and Andrew “McLovin” Perloff – that contributes to the discussion throughout the show (though interviews are handled exclusively by Patrick… unless he chooses to bring one of the Danettes into the discussion), including several segments offered only for the DirecTV audience watching live every morning (or during reruns of the show offered throughout the day) focused primarily on the supporting cast. Patrick has a tremendous selection of guests at his disposal from the sports set as well… with the exception of ESPN employees (if you listen, you know… ESPN employees are discouraged from going on the show, and over their time on the air several ESPN personalities have tried to defy the order and scheduled appearances only to be cancelled under awkward, suspicious circumstances). All of the top names in the games spend time with Dan, but he also brings in some of the lesser-known names from the print and blog industry to contribute along the way (producing some of the best segments the show offers). Will Leitch and A.J. Daulerio, Tony Bruno, Mike Florio, Michael Strahan, and Kevin Frazier have all enjoyed stints as guest hosts for the show, giving you a wide variety of influence and contribution that stretches across every inch of the sports media universe.

If you listen to (or watch) one, chances are you don’t listen to the other. Rumor has it the two found a bit of contentious face time at Super Bowl XLV and the rest of the blogosphere have spent the last year or so dividing camps and drawing lines in their own yards in defining which show they support.

And thus we wanted to ask…