We are all emotionally attached to food. Pembroke Decatur Gwaltney, Jr.  took food attachment just… a step … further. One hundred and ten years ago, Gwaltney found a cured ham that had been left behind. Gwaltney developed … an emotional attachment to the ham. He lived with the ham. He called the Ham his pet. He bought the Ham a brass collar. As the heir to the Gwaltney foods fortune, Virginians just kind of let Gwaltney have his eccentricities. Yeah, that’s the best word for it.

We don’t want to know all that Gwaltney did with the ham. We know that he took his Pet Ham to State Fairs. We know that the Ham was insured for five thousand dollars. When Gwaltney died, the good people of Smithfield could not bear to see the Ham go as well. So, they did what any normal rational people would do with a Pet Ham that was decades old. They put… the Pet Ham… in a museum. That is correct. You can go visit Pembroke Gwaltney’s Pet Ham. 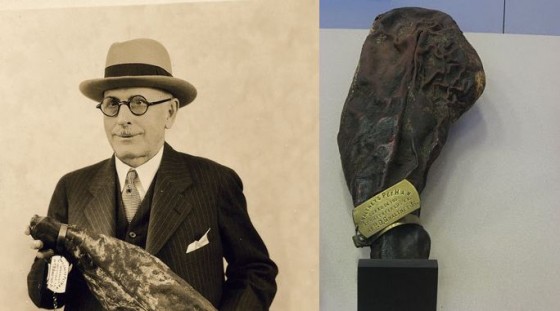 The ham (still at a spry known age on 110 years old, after all what respectable ham would tell its true age?) is still reported to be perfectly edible. However, even if you were to get past the security and steal the Ham, would you really be able to look into the eyes of a beloved Pet Ham and eat it? Of course, cooked correctly it would be delicious and you would have that gold plate for a souvenir, but what type of monster would truly have it in them to eat someone’s Pet Ham?

We just simply can’t imagine the cruel monster who would succumb to such an urge. If you are close, the world’s greatest potential Christmas Ham (even if it is a beloved pet) is still viewable at the Isle of Wight Museum in Smithfield, Virginia.